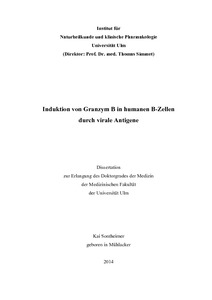 Recent studies revealed that human B cells are able to secrete the pro-apoptotic serine protease granzyme B upon stimulation via their B cell receptor in the presence of the acute phase cytokine interleukin 21. Interleukin 21 is one of the first cytokines found in high concentrations in the serum of patients suffering from acute viral infections. In this study we investigated the possible role of granzyme B-secreting B cells in the early phase of an antiviral immune defence. We found that B cells from subjects recently vaccinated against Tick-borne encephalitis virus but not B cells form unvaccinated individuals were able to secrete substantial amounts of granzyme B upon in vitro restimulation with the corresponding antigens and interleukin 21. In CD5+ B cells from human cord blood this effect was significantly stronger compared to CD5- B cells. Additionally CD5+ B cells reacted with a very strong granzyme B secretion upon the first contact with the viral antigens without prior in vivo preconditioning. Granzyme B induction was dependant on B cell receptor and Toll-like receptor signalling in both B cell populations, since the induction of granzyme B through viral antigens could be inhibited by Toll-like receptor inhibiting oligonucleotides. With their superior potential as granzyme B-secreting B cells CD5+ B cells from cord blood were prestimulated with B cell receptor-activating antibodies and interleukin 21 and co-incubated with HeLa cells as possible target cells. Using spinning disc microscopy and a fluorogenic granzyme B-substrate we could confirm that these granzyme B-expressing B cells, in direct contact with HeLa cells, were able to transduce enzymatically active granzyme B into the HeLa cells. These findings suggest a possible role of granzyme B-secreting B cells in the early phase of viral infections either by killing virus infected cells via granzyme B mediated apoptosis or as regulatory B cells through paracrine actions of the secreted granzyme B.