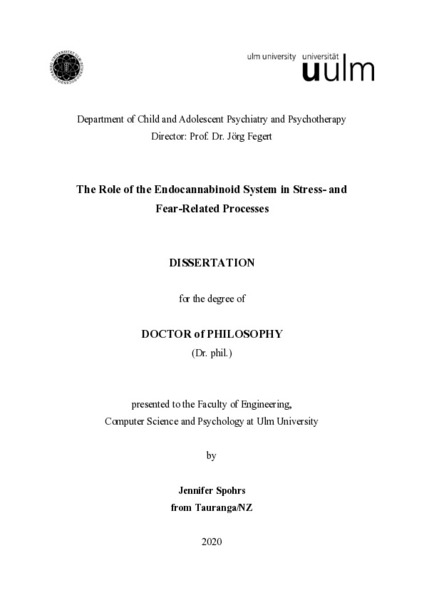 Anxiety- and trauma-related disorders are severe and debilitating illnesses and among the most prevalent psychiatric disorders worldwide. The current treatment options include psychopharmacological support and particularly exposure-based psychotherapy. Both approaches leave room for improvement and with the ongoing legalisation of medical cannabis, the endocannabinoid system (ECS) has become one of the key targets in psychopharmacological research. Rodent models suggest an anxiolytic effect for the two main endocannabinoids, anandamide (AEA) and 2-arachidonoylglycerol (2-AG), and were able to demonstrate that the ECS is involved in stress-related processes, the modulation of fear learning and aversive memory consolidation. So far, the most promising therapeutic potential has been the inhibition of the degrading enzymes of AEA, fatty acid amino hydrolase (FAAH), as well as that of 2-AG, monoacylglycerol lipase (MAGL). Additionally, the application of cannabinoid receptor agonists and the phytocannabinoid cannabidiol (CBD) has yielded promising results. Research in humans and clinical samples remains scarce, but some studies have pointed towards different levels of circulating endocannabinoids in psychiatric disorders, and genetic studies have found several single nucleotide polymorphisms (SNP) to have an impact on the availability of endocannabinoids. Most frequently mentioned is the FAAH SNP C385A (rs324420), which is associated with lower catabolic performance of FAAH and subsequently increased levels of AEA. Previous findings are encouraging, but translational research on the basic functioning of the ECS in fear learning processes is rare, yet crucial to understand the mechanisms involved. To address this lack of research, this thesis was designed to advance the translational transfer of animal research findings regarding the role of peripheral endocannabinoids in fear conditioning, fear extinction, and extinction recall. Study 1 investigated these processes in 55 healthy, male humans who underwent functional magnetic resonance imaging (fMRI) before analysing baseline and task-related changes of AEA and 2-AG, as well as the FAAH polymorphism (rs324420). In study 2, the fear ratings of 41 patients with anxiety-related disorders, who received an exposure-based therapy as part of their guideline cognitive- behavioural therapy (CBT) were examined with regard to the same polymorphism. Results from Study 1 showed that stress, evoked by means of an unpleasant heat stimulus, was associated with decreases in AEA and increases in 2-AG, however only in a subsample. For fear conditioning, no significant correlations between the endocannabinoids and neural activation were found. The neural activation associated with extinction learning correlated Abstract XV positively with baseline AEA levels, and task-related changes in AEA were found particularly during fear extinction learning, independent of the genotype. Next, extinction recall varied as a function of the FAAH SNP C385A, resulting in a greater neural activation associated with the extinction recall for AC-heterozygotes. In Study 2, no significant interaction of genotype and extinction learning was found. The data indicate a putative role for 2-AG in the processing of stress-related stimuli, an important role for AEA in fear extinction learning, as well as an enhanced neural signal related to extinction recall in relevant brain regions in AC-heterozygotes of the FAAH SNP C385A. As a prospective clinical proof of concept, patients with stress or anxiety disorders and lower AEA levels could be pre-treated with AEA-enhancing or FAAH inhibiting drugs to promote extinction learning prior to cognitive behavioural therapy interventions. Future neuropsychological studies applying psychopharmacological interventions in patients with anxiety disorders are highly necessary to reveal the potential benefits of cannabinoids. As with the FAAH polymorphism, future research should investigate the putative roles of 2-AG and MAGL, as well as their genetic precursors, in fear and anxiety disorders.