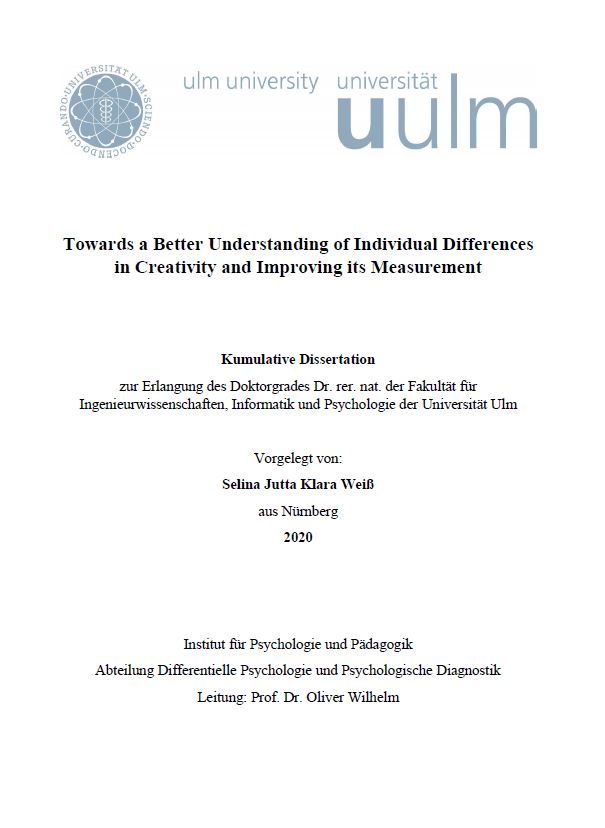 Individual differences in creativity have been studied and measured for over a century. However, our understanding of creativity as a cognitive ability and its relation to other psychological constructs is still limited. This might partly be due to a) lack of interdisciplinary collaboration, b) low convergent validity of measures that supposedly assess creativity, and c) the small number of multivariate studies investigating the nomological net of creativity. This dissertation addresses these limitations by studying the interdisciplinary understanding of creativity (Manuscript I), its measurement (Manuscript II), and the nomological net of creativity (Manuscript III and IV). The first Manuscript considers and discusses an interdisciplinary view on similarities and dissimilarities between creativity in applied linguistics and psychology. Based on this review, I introduce and relate common terminology and discuss domain-general processes in both disciplines. I conclude by stating that applied linguistics can contribute important expertise for improving the psychometrics of performance appraisals through creativity measures in psychology. In the second Manuscript, I develop a taxonomy for categorizing creativity indicators and summarize the creativity measurements applied since the 1900s based on an exhaustive literature review. This taxonomy—including measurement approaches, definitions of constructs, data types, scoring, and psychometric problems—allows assessing the convergent validity of measures and the development of new and more innovative ones. It is concluded that the application of divergent thinking tasks (tapping aspects such as fluency and originality) shows the smallest discrepancies between the standard definition of creativity as ability and the measures' scope. In the third Manuscript, a selection of these tasks was included in two extensive multivariate studies to shed new light on measurement models of creativity and embed creativity into a nomological net of established ability constructs, personality, and insight. The findings imply that a distinction between the two major aspects of divergent thinking (fluency and originality) is psychometrically difficult. Additionally, the results encourage an interpretation of divergent thinking as an ability construct that is more than just a linear combination of intelligence, personality, and insight. In a fourth study, the threshold theory is thoroughly investigated. It states that an individual's creativity might benefit from intelligence at low intelligence levels, but not once intelligence is above a certain threshold. Based on hitherto proposed and improved methodological approaches and two data sets, I conclude that intelligence and creativity are linearly related across the continuum of intelligence. In total, these four Manuscripts provide guidance in understanding and measuring creativity as a unique psychological construct. This inspires future research approaches, such as a) new assessments, b) alternative scoring procedures, and c) an enlargement of the nomological net of creativity by potentially related constructs (e.g., retrieval ability and emotional creativity).