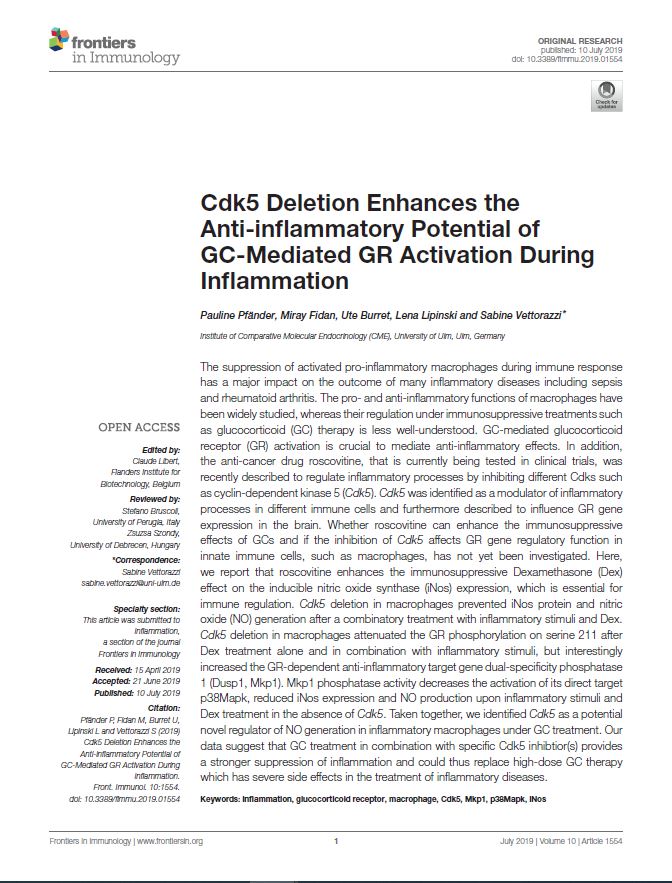 The suppression of activated pro-inflammatory macrophages during immune response has a major impact on the outcome of many inflammatory diseases including sepsis and rheumatoid arthritis. The pro- and anti-inflammatory functions of macrophages have been widely studied, whereas their regulation under immunosuppressive treatments such as glucocorticoid (GC) therapy is less well-understood. GC-mediated glucocorticoid receptor (GR) activation is crucial to mediate anti-inflammatory effects. In addition, the anti-cancer drug roscovitine, that is currently being tested in clinical trials, was recently described to regulate inflammatory processes by inhibiting different Cdks such as cyclin-dependent kinase 5 (Cdk5). Cdk5 was identified as a modulator of inflammatory processes in different immune cells and furthermore described to influence GR gene expression in the brain. Whether roscovitine can enhance the immunosuppressive effects of GCs and if the inhibition of Cdk5 affects GR gene regulatory function in innate immune cells, such as macrophages, has not yet been investigated. Here, we report that roscovitine enhances the immunosuppressive Dexamethasone (Dex) effect on the inducible nitric oxide synthase (iNos) expression, which is essential for immune regulation. Cdk5 deletion in macrophages prevented iNos protein and nitric oxide (NO) generation after a combinatory treatment with inflammatory stimuli and Dex. Cdk5 deletion in macrophages attenuated the GR phosphorylation on serine 211 after Dex treatment alone and in combination with inflammatory stimuli, but interestingly increased the GR-dependent anti-inflammatory target gene dual-specificity phosphatase 1 (Dusp1, Mkp1). Mkp1 phosphatase activity decreases the activation of its direct target p38Mapk, reduced iNos expression and NO production upon inflammatory stimuli and Dex treatment in the absence of Cdk5. Taken together, we identified Cdk5 as a potential novel regulator of NO generation in inflammatory macrophages under GC treatment. Our data suggest that GC treatment in combination with specific Cdk5 inhibtior(s) provides a stronger suppression of inflammation and could thus replace high-dose GC therapy which has severe side effects in the treatment of inflammatory diseases.