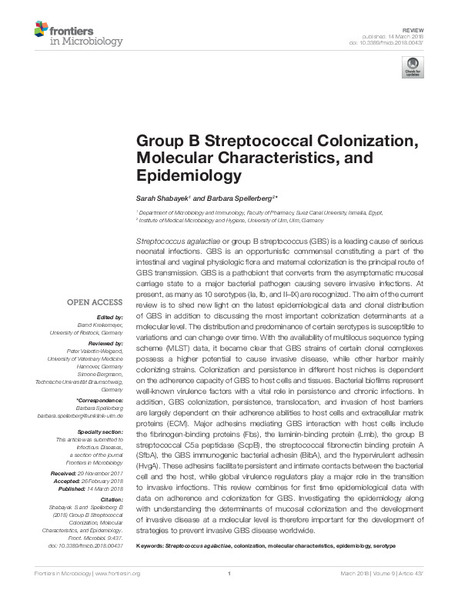 Streptococcus agalactiae or group B streptococcus (GBS) is a leading cause of serious neonatal infections. GBS is an opportunistic commensal constituting a part of the intestinal and vaginal physiologic flora and maternal colonization is the principal route of GBS transmission. GBS is a pathobiont that converts from the asymptomatic mucosal carriage state to a major bacterial pathogen causing severe invasive infections. At present, as many as 10 serotypes (Ia, Ib, and II–IX) are recognized. The aim of the current review is to shed new light on the latest epidemiological data and clonal distribution of GBS in addition to discussing the most important colonization determinants at a molecular level. The distribution and predominance of certain serotypes is susceptible to variations and can change over time. With the availability of multilocus sequence typing scheme (MLST) data, it became clear that GBS strains of certain clonal complexes possess a higher potential to cause invasive disease, while other harbor mainly colonizing strains. Colonization and persistence in different host niches is dependent on the adherence capacity of GBS to host cells and tissues. Bacterial biofilms represent well-known virulence factors with a vital role in persistence and chronic infections. In addition, GBS colonization, persistence, translocation, and invasion of host barriers are largely dependent on their adherence abilities to host cells and extracellular matrix proteins (ECM). Major adhesins mediating GBS interaction with host cells include the fibrinogen-binding proteins (Fbs), the laminin-binding protein (Lmb), the group B streptococcal C5a peptidase (ScpB), the streptococcal fibronectin binding protein A (SfbA), the GBS immunogenic bacterial adhesin (BibA), and the hypervirulent adhesin (HvgA). These adhesins facilitate persistent and intimate contacts between the bacterial cell and the host, while global virulence regulators play a major role in the transition to invasive infections. This review combines for first time epidemiological data with data on adherence and colonization for GBS. Investigating the epidemiology along with understanding the determinants of mucosal colonization and the development of invasive disease at a molecular level is therefore important for the development of strategies to prevent invasive GBS disease worldwide.