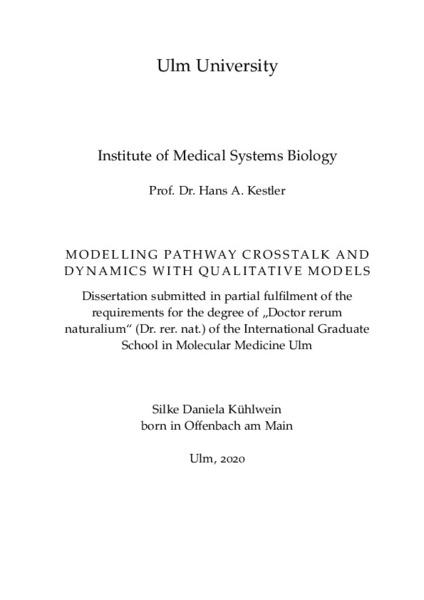 Given the complex nature of biological systems and organisms, the examination of single protein interactions is not enough to understand ageing, the development of diseases or cancer. For this reason, this thesis aimed to explore new relationships between signalling pathways. This was achieved by studying various signalling pathways with Boolean network models. First, the crosstalk of insulin-like growth factor 1 (IGF-1) and Wingless (Wnt), as well as the signalling pathway of nuclear factor kappa-light chain-enhancer of activated B-cells (NF- B) were investigated by a literature-based and a data-driven approach. Despite huge differences in the model setups, similar conclusions were drawn from model simulations. Although the process of ageing could only be simulated by crosstalk of IGF-1 and Wnt, it could be shown that Wnt signalling dominates IGF-1 by impairing feedback. Thereby, proteins maintain their activity state. Likewise, proteins that were constantly inactive could be found in the reconstructed NF- B networks of young and aged phenotype. Network analyses further indicated a loss of redundant protein interactions accompanied by an escalation in error susceptibility with age. These alterations in activity and accumulation of damage can, in turn, be attributed to the development of ageing-associated diseases. In particular, activation of the mammalian target of rapamycin complex 1 (mTORC1) could be identified in the IGF-1/Wnt model, which can be associated with the development of diabetes mellitus type II and the inhibition of autophagy. Likewise, constantly inactive components in the NF- B model seem to be involved in a decreased inflammatory response and reduced angiogenesis. The next step in this work was to investigate the role of cofilin-1 (CFL1) in pancreatic cancer. Previously it was already known that CFL1 is highly expressed in pancreatic cancer and correlates with high invasiveness and poor prognosis. However, pathways that contribute to fast cancer progression were still unknown. Based on a Boolean network model newly established in this thesis, it was possible to predict them. Model simulations indicated that Kirsten rat sarcoma (KRAS) induces an imbalance in actin remodelling leading to overexpression and activation of CFL1. Due to the imbalance in actin remodelling, it seems that the expression of the transcription factor 7-like 2 (TCF7L2) can no longer be suppressed by protein kinase D1 (PRKD1) which leads to an increased expression of TCF7L2 itself and subsequently induces the expression of CFL1. In addition, the activator of CFL1, slingshot (SSH1L), seems to be increasingly expressed by an increased AURKA expression. Thus, CFL1 would not only be present in increased quantities but can also be activated. These model-based assumptions that both AURKA and TCF7L2 are overexpressed in pancreatic cancer patients could be confirmed by gene expression data from pancreatic cancer tissues. Besides the signalling pathway leading to the overexpression and activation of CFL1, the model could also provide an explanation for the involvement of CFL1 in proliferation control and apoptosis inhibition. Here, model simulations suggested that CFL1 regulates cell cycle components based on its impact on the signal transducer and activator of transcription 3 (STAT3). This assumption could be supported by western blots showing reduced protein levels of STAT3. Moreover, STAT3 also seems to be involved in the abrogation of apoptosis in pancreatic cancer cells by inducing the expression of anti-apoptotic proteins. In addition, to reveal the role of CFL1 in pancreatic cancer, the newly established model was used to suggest new therapeutic targets for pancreatic cancer patients with high CFL1 expression. Here, the most promising identified intervention target was CD44 antigen whose in silico inhibition blocked the proliferative phenotype and induced apoptosis. The last part of this thesis dealt with the identification of dynamic-influencing nodes, called implicants. Here, a new algorithm was established that is able to identify these implicants in a feasible time frame. By studying 35 publically available, biologically motivated Boolean network models, it could be shown that a small set of nodes is sufficient to determine the dynamics of a complete system. Although highly connected components (hubs) are frequently considered to be master regulators of biological processes, the majority of implicants were not static hubs. Furthermore, it could be shown that targeting these implicants reduces the risk for side effects in comparison to targeting static hubs. The superiority of dynamic influencing-targets versus static hubs was confirmed by experimental validation of a newly established Boolean network model depicting the crosstalk of Wnt and mitogen activating protein kinase (MAPK) in colorectal cancer. Based on this model dynamic determining proteins were identified. The two most promising targets, extracellular signal-regulated protein kinase (ERK) and cancerous inhibitor of protein phosphatase 2A (CIP2A) were treated with specific inhibitors. Thereby, it was shown that their inhibition reduced the proliferative and invasive potential of colorectal cancer cells.