Distinct dynamics of stem and progenitor cells in trauma regeneration 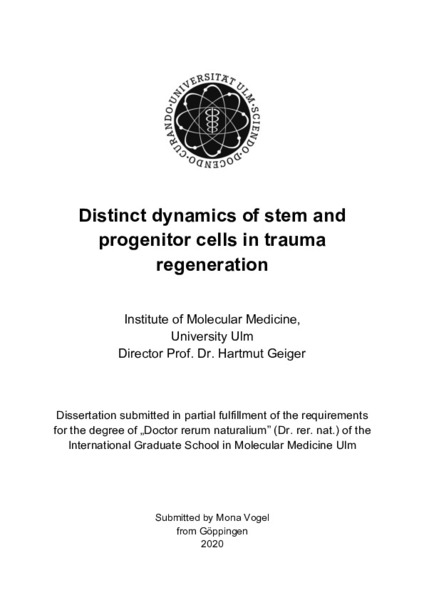 Worldwide about 10 % of deaths are caused by physiological trauma. We hypothesize that endogenous stem and progenitor cells (SPCs) are mobilized to PB and the site of injury at distinct time-points post trauma to likely affect trauma outcome. Providing elevated levels of endogenous SPCs at distinct time point post trauma via mobilization might improve trauma outcome. Thus, I analyzed the number of hematopoietic stem cells (HSCs), common myeloid progenitors, granulocyte-macrophage progenitors and mesenchymal stromal cells (MSCs) in PB 0-3 h, 24 h, 48 h and 120 h after polytrauma (PT). The number of SPCs in blood followed a synchronous, inverse bell-shaped distribution. Interestingly, analysis of the change in the number of SPCs in PB between 48 h and 120 h identified two distinct patient groups: Group 1 was characterized by a strong increase in the number of SPCs and group 2 was characterized by an almost absent increase in the number of SPCs compared to their nadir at 24 h – 48 h post PT. The low increase in the number of SPCs was associated with higher levels of pro-inflammatory cytokines at the early phase of trauma. Furthermore, two out of three patients with the almost absent increase in the number of SPCs in blood had severe septic complications and the longest stay in ICU. The data provide a strong indication for further investigations on the role of stem cell mobilization in PT patients and its likely positive impact on trauma outcome. To then unravel the impact of SPC mobilization on trauma outcome, I determined the number of distinct SPC populations in a time interval of 0.2 h - 168 h simultaneously in PB, BM and lung tissue after inducing a blunt thorax trauma (TXT) in mice. There was an increase in the number of leukocytes 2 h after TXT in PB and lung tissue, which is a clear indication of inflammation. A change in the number of SPCs at all time points analyzed and for all tissues tested though was relatively rare, indicating that SPCs might play a minor role for the inflammatory phase of the healing process. I found a significantly increased number of HSCs 48 h after TXT induction in the lung which might imply a role for HSCs in the remodeling and thus regenerative phase of trauma regeneration. Application of AMD3100, a short-term mobilizer of stem and mature cells at 0 h and 6 h after TXT further increased the number of hematopoietic SPCs in PB 2 h after treatment compared to control treated TXT animals. However, biomarkers of outcome like inflammatory cytokines were not improved in AMD3100 treated animals. The data support that treatment with AMD3100 in the early phase after TXT does not affect trauma outcome or lung regeneration, while the effect of mobilization of SPCs at later time-points (after 6 h) post TXT will need to be further investigated.