Moving beyond the host: unraveling the skin microbiome of endangered Costa Rican amphibians 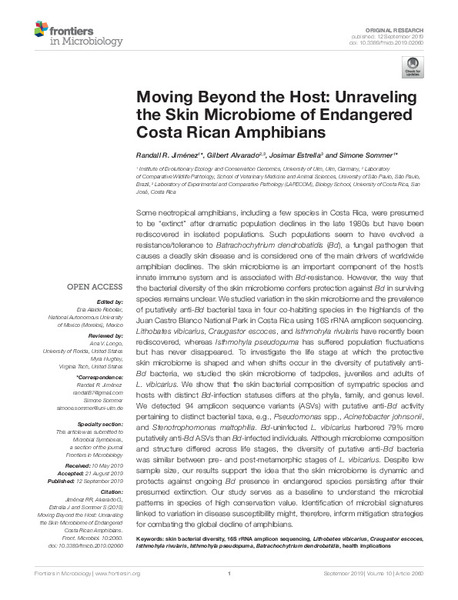 Some neotropical amphibians, including a few species in Costa Rica, were presumed to be “extinct” after dramatic population declines in the late 1980s but have been rediscovered in isolated populations. Such populations seem to have evolved a resistance/tolerance to Batrachochytrium dendrobatidis (Bd), a fungal pathogen that causes a deadly skin disease and is considered one of the main drivers of worldwide amphibian declines. The skin microbiome is an important component of the host’s innate immune system and is associated with Bd-resistance. However, the way that the bacterial diversity of the skin microbiome confers protection against Bd in surviving species remains unclear.We studied variation in the skin microbiome and the prevalence of putatively anti-Bd bacterial taxa in four co-habiting species in the highlands of the Juan Castro Blanco National Park in Costa Rica using 16S rRNA amplicon sequencing. Lithobates vibicarius, Craugastor escoces, and Isthmohyla rivularis have recently been rediscovered, whereas Isthmohyla pseudopuma has suffered population fluctuations but has never disappeared. To investigate the life stage at which the protective skin microbiome is shaped and when shifts occur in the diversity of putatively anti- Bd bacteria, we studied the skin microbiome of tadpoles, juveniles and adults of L. vibicarius. We show that the skin bacterial composition of sympatric species and hosts with distinct Bd-infection statuses differs at the phyla, family, and genus level. We detected 94 amplicon sequence variants (ASVs) with putative anti-Bd activity pertaining to distinct bacterial taxa, e.g., Pseudomonas spp., Acinetobacter johnsonii, and Stenotrophomonas maltophilia. Bd-uninfected L. vibicarius harbored 79% more putatively anti-Bd ASVs than Bd-infected individuals. Although microbiome composition and structure differed across life stages, the diversity of putative anti-Bd bacteria was similar between pre- and post-metamorphic stages of L. vibicarius. Despite low sample size, our results support the idea that the skin microbiome is dynamic and protects against ongoing Bd presence in endangered species persisting after their presumed extinction. Our study serves as a baseline to understand the microbial patterns in species of high conservation value. Identification of microbial signatures linked to variation in disease susceptibility might, therefore, inform mitigation strategies for combating the global decline of amphibians.