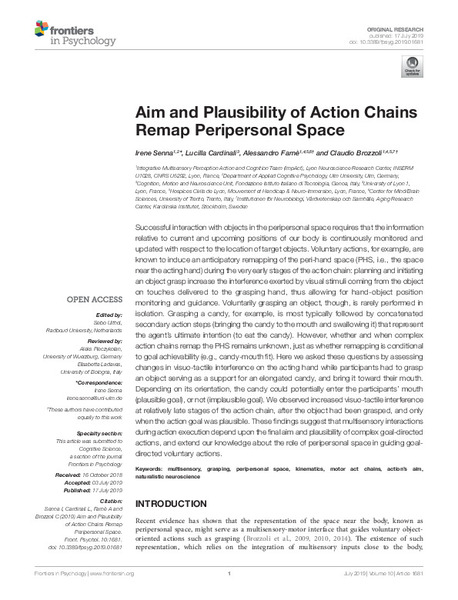 Successful interaction with objects in the peripersonal space requires that the information relative to current and upcoming positions of our body is continuously monitored and updated with respect to the location of target objects. Voluntary actions, for example, are known to induce an anticipatory remapping of the peri-hand space (PHS, i.e., the space near the acting hand) during the very early stages of the action chain: planning and initiating an object grasp increase the interference exerted by visual stimuli coming from the object on touches delivered to the grasping hand, thus allowing for hand-object position monitoring and guidance. Voluntarily grasping an object, though, is rarely performed in isolation. Grasping a candy, for example, is most typically followed by concatenated secondary action steps (bringing the candy to the mouth and swallowing it) that represent the agent’s ultimate intention (to eat the candy). However, whether and when complex action chains remap the PHS remains unknown, just as whether remapping is conditional to goal achievability (e.g., candy-mouth fit). Here we asked these questions by assessing changes in visuo-tactile interference on the acting hand while participants had to grasp an object serving as a support for an elongated candy, and bring it toward their mouth. Depending on its orientation, the candy could potentially enter the participants’ mouth (plausible goal), or not (implausible goal). We observed increased visuo-tactile interference at relatively late stages of the action chain, after the object had been grasped, and only when the action goal was plausible. These findings suggest that multisensory interactions during action execution depend upon the final aim and plausibility of complex goal-directed actions, and extend our knowledge about the role of peripersonal space in guiding goal-directed voluntary actions.