The effects of childhood maltreatment on epigenetic regulation of stress-response associated genes: an intergenerational approach 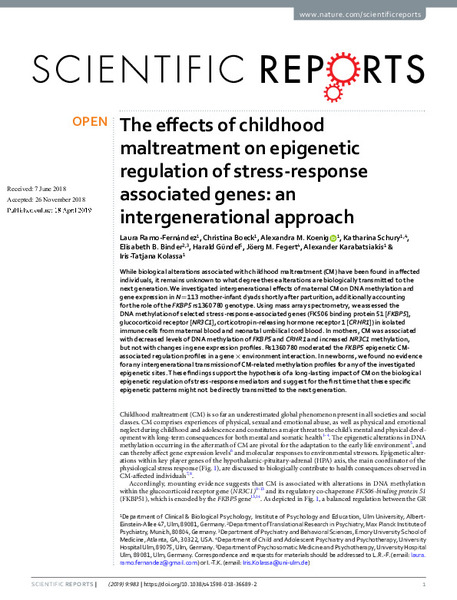 While biological alterations associated with childhood maltreatment (CM) have been found in affected individuals, it remains unknown to what degree these alterations are biologically transmitted to the next generation. We investigated intergenerational effects of maternal CM on DNA methylation and gene expression in N = 113 mother-infant dyads shortly after parturition, additionally accounting for the role of the FKBP5 rs1360780 genotype. Using mass array spectrometry, we assessed the DNA methylation of selected stress-response-associated genes (FK506 binding protein 51 [FKBP5], glucocorticoid receptor [NR3C1], corticotropin-releasing hormone receptor 1 [CRHR1]) in isolated immune cells from maternal blood and neonatal umbilical cord blood. In mothers, CM was associated with decreased levels of DNA methylation of FKBP5 and CRHR1 and increased NR3C1 methylation, but not with changes in gene expression profiles. Rs1360780 moderated the FKBP5 epigenetic CMassociated regulation profiles in a gene × environment interaction. In newborns, we found no evidence for any intergenerational transmission of CM-related methylation profiles for any of the investigated epigenetic sites. These findings support the hypothesis of a long-lasting impact of CM on the biological epigenetic regulation of stress-response mediators and suggest for the first time that these specific epigenetic patterns might not be directly transmitted to the next generation.