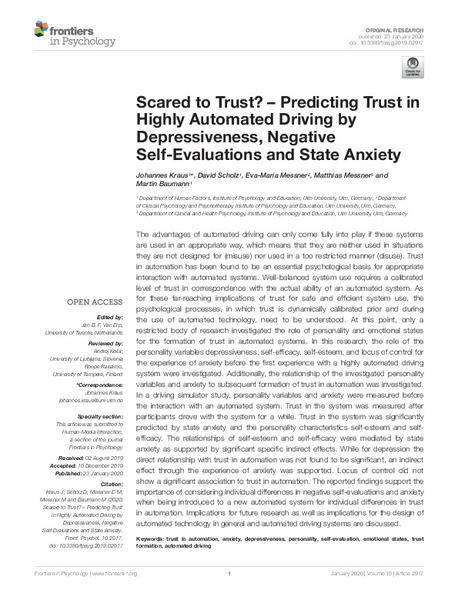 The advantages of automated driving can only come fully into play if these systems are used in an appropriate way, which means that they are neither used in situations they are not designed for (misuse) nor used in a too restricted manner (disuse). Trust in automation has been found to be an essential psychological basis for appropriate interaction with automated systems. Well-balanced system use requires a calibrated level of trust in correspondence with the actual ability of an automated system. As for these far-reaching implications of trust for safe and efficient system use, the psychological processes, in which trust is dynamically calibrated prior and during the use of automated technology, need to be understood. At this point, only a restricted body of research investigated the role of personality and emotional states for the formation of trust in automated systems. In this research, the role of the personality variables depressiveness, self-efficacy, self-esteem, and locus of control for the experience of anxiety before the first experience with a highly automated driving system were investigated. Additionally, the relationship of the investigated personality variables and anxiety to subsequent formation of trust in automation was investigated. In a driving simulator study, personality variables and anxiety were measured before the interaction with an automated system. Trust in the system was measured after participants drove with the system for a while. Trust in the system was significantly predicted by state anxiety and the personality characteristics self-esteem and selfefficacy. The relationships of self-esteem and self-efficacy were mediated by state anxiety as supported by significant specific indirect effects. While for depression the direct relationship with trust in automation was not found to be significant, an indirect effect through the experience of anxiety was supported. Locus of control did not show a significant association to trust in automation. The reported findings support the importance of considering individual differences in negative self-evaluations and anxiety when being introduced to a new automated system for individual differences in trust in automation. Implications for future research as well as implications for the design of automated technology in general and automated driving systems are discussed.