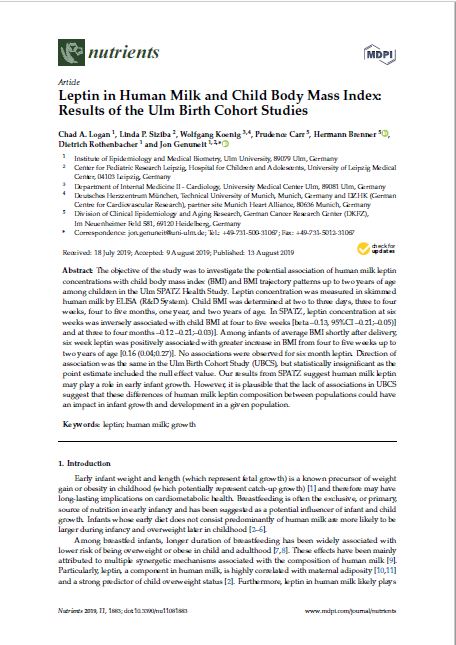 The objective of the study was to investigate the potential association of human milk leptin concentrations with child body mass index (BMI) and BMI trajectory patterns up to two years of age among children in the Ulm SPATZ Health Study. Leptin concentration was measured in skimmed human milk by ELISA (R&D System). Child BMI was determined at two to three days, three to four weeks, four to five months, one year, and two years of age. In SPATZ, leptin concentration at six weeks was inversely associated with child BMI at four to five weeks [beta –0.13, 95%CI –0.21;–0.05)] and at three to four months –0.12 –0.21;–0.03)]. Among infants of average BMI shortly after delivery, six week leptin was positively associated with greater increase in BMI from four to five weeks up to two years of age [0.16 (0.04;0.27)]. No associations were observed for six month leptin. Direction of association was the same in the Ulm Birth Cohort Study (UBCS), but statistically insignificant as the point estimate included the null e ect value. Our results from SPATZ suggest human milk leptin may play a role in early infant growth. However, it is plausible that the lack of associations in UBCS suggest that these di erences of human milk leptin composition between populations could have an impact in infant growth and development in a given population.