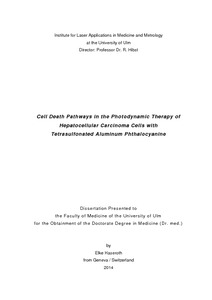 This work deals with the photodynamic treatment (PDT) of hepatocellular carcinoma cell lines with the photosensitizer tetrasulfonated aluminum phthalocyanine (AlPcS4). Two different forms of AlPcS4 were compared. Dark and photo-toxicity of the photosensitizer were assayed as function of parameters such as concentration and irradiation dose. To assess cellular mechanisms involved in the observed cell death, responses of neutral red and MTT assays were investigated, as well as the influence of caspase inhibitors. As potential indicator of apoptosis, cytochrome c release from mitochondria was monitored. Furthermore, possibilities to acquire information about photosensitizer uptake and reactions taking place in PDT with the help of laser scanning microscopy and specific fluorochromes were studied. PDT with AlPcS4 led to dying of hepatocellular carcinoma cells in vitro that was concentration and dose dependent but independent of the form of AlPcS4 used or of the cell line considered. AlPcS4 was shown to be readily taken up by the cells and accumulated in a lysosome-like intracellular pattern, while upon irradiation AlPcS4-depleted vacuoles are formed. Lysosomal as well as mitochondrial damage was demonstrated in different techniques although the sequence of the observed events was not precisely established. One broad-spectrum caspase inhibitor seemed to provide a little protection. AlPcS4-PDT on hepatocellular carcinoma cells probably induces necrotic cell death, although there is some evidence that apoptotic or other forms of organized cell death could account for a part of the treatment"s effects, the ratio between both being possibly a target to modulation by varying experimental conditions. Because major effects of PDT occur in minutes following irradiation, further experiments should aim at elucidating these effects with rapid techniques. Laser scanning microscopy may be a valuable tool in this context.