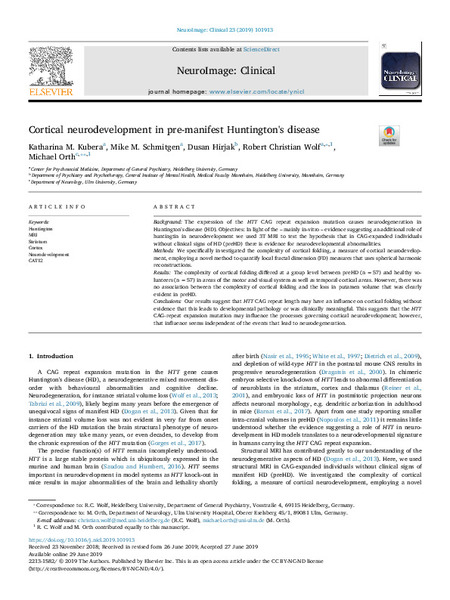 Background: The expression of the HTT CAG repeat expansion mutation causes neurodegeneration in Huntington's disease (HD). Objectives: In light of the – mainly in-vitro – evidence suggesting an additional role of huntingtin in neurodevelopment we used 3T MRI to test the hypothesis that in CAG-expanded individuals without clinical signs of HD (preHD) there is evidence for neurodevelopmental abnormalities. Methods: We specifically investigated the complexity of cortical folding, a measure of cortical neurodevelopment, employing a novel method to quantify local fractal dimension (FD) measures that uses spherical harmonic reconstructions. Results: The complexity of cortical folding differed at a group level between preHD (n=57) and healthy volunteers (n=57) in areas of the motor and visual system as well as temporal cortical areas. However, there was no association between the complexity of cortical folding and the loss in putamen volume that was clearly evident in preHD. Conclusions: Our results suggest that HTT CAG repeat length may have an influence on cortical folding without evidence that this leads to developmental pathology or was clinically meaningful. This suggests that the HTT CAG-repeat expansion mutation may influence the processes governing cortical neurodevelopment; however, that influence seems independent of the events that lead to neurodegeneration.