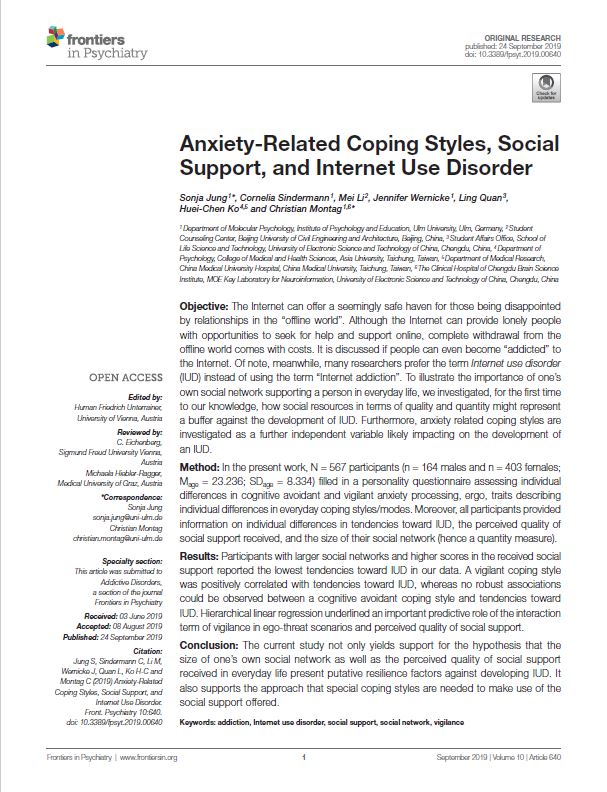 Objective: The Internet can offer a seemingly safe haven for those being disappointed by relationships in the “offline world”. Although the Internet can provide lonely people with opportunities to seek for help and support online, complete withdrawal from the offline world comes with costs. It is discussed if people can even become “addicted” to the Internet. Of note, meanwhile, many researchers prefer the term Internet use disorder (IUD) instead of using the term “Internet addiction”. To illustrate the importance of one’s own social network supporting a person in everyday life, we investigated, for the first time to our knowledge, how social resources in terms of quality and quantity might represent a buffer against the development of IUD. Furthermore, anxiety related coping styles are investigated as a further independent variable likely impacting on the development of an IUD. Method: In the present work, N = 567 participants (n = 164 males and n = 403 females; Mage = 23.236; SDage = 8.334) filled in a personality questionnaire assessing individual differences in cognitive avoidant and vigilant anxiety processing, ergo, traits describing individual differences in everyday coping styles/modes. Moreover, all participants provided information on individual differences in tendencies toward IUD, the perceived quality of social support received, and the size of their social network (hence a quantity measure). Results: Participants with larger social networks and higher scores in the received social support reported the lowest tendencies toward IUD in our data. A vigilant coping style was positively correlated with tendencies toward IUD, whereas no robust associations could be observed between a cognitive avoidant coping style and tendencies toward IUD. Hierarchical linear regression underlined an important predictive role of the interaction term of vigilance in ego-threat scenarios and perceived quality of social support. Conclusion: The current study not only yields support for the hypothesis that the size of one’s own social network as well as the perceived quality of social support received in everyday life present putative resilience factors against developing IUD. It also supports the approach that special coping styles are needed to make use of the social support offered.