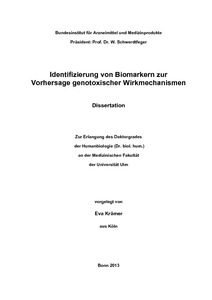 This study aimed to identifying biomarkers for the evaluation of substances" genotoxic modes of action (GMOA) by combining three in vitro parameters: increase of tumor suppressor p53 and its target protein p21, p53 phosphorylation and toxicogenomic data from HepG2 cells. Cells were treated with pairs of genotoxins (GTX) representing three different GMOA: Two topoisomerase II inhibitors etoposid (EP) and daunorubicine (DR) that are known clastogens, two antimetabolites AZT and lamivudine (LM) and two mitotic spindle inhibitors, griseofulvin (GF) and paclitaxel (PT) that act as aneugens. Two non-genotoxic (NGTX) carcinogens were selected for comparison: phenobarbital (PB) and PMA. Detected effects were compared among substance pairs as well as between GTX and NGTX. Gene expression was measured by microarrays, increases of p53 and p21 were evaluated by Western Blot and phosphorylation of p53 at serines 15, 46 and 392 was measured by ELISA. A microarray-generated expression profile was modulated from ten specific regulated genes and 13 genes, significantly regulated from the p53 signaling pathway. A hierarchical cluster analysis (HCA) identified similarities between substance pairs as well as differences between clastogens, aneugens and NGTX. Western blot analysis: Topoisomerase inhibitors and mitotic spindle inhibitors showed an increase in p53 and thus a p53-dependent p21 induction. Antimetabolites and NGTX mediated a p53-independent induction of p21. Phosphorylation of p53 showed that EP and DR lead to significant phosphorylation at serines 15, 46 and 392. PT and GF caused significant phosphorylation only at serine 392, LM only at serines 15 and 392. No significant increase in phosphorylation was observed after treatment with AZT or NGTX. These results could be used in further research regarding biomarkers for GMOAs. However, the database needs to be extended because the comparisons of substance pairs carried out here is not yet sufficient for a reliable assessment.