Mimicking the reactive center of photosystem II : analysis of the reaction behavior of free tetrameric and pentameric (Calcium-)manganese-oxide cluster ions 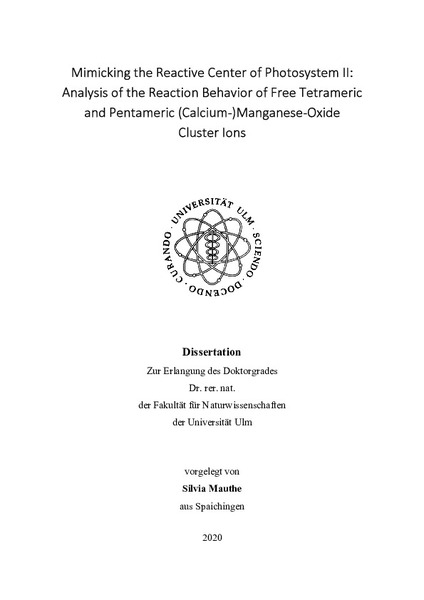 Calcium-manganese-oxides are of great current interest regarding the biomimetic activation and oxidation of water. However, few is known so far concerning the activity of calcium-manganese-oxide nanoclusters in this reaction. One of the fundamental processes is nature is the catalytically activated water splitting which proceeds in the biological photosystem II. The water oxidation is catalyzed by a small CaMn3O4·MnO cluster which together with its ligands forms the oxygen-evolving complex. This cluster can serve as a molecular model system for catalyzed water activation and the comprehension of its water splitting chemistry. Furthermore, the investigations of this cluster will assist the development of efficient, ecological, and industrially applicable advanced catalytic materials. In this thesis, the successful preparation of isolated, ligand-free tetrameric CaxMn4-xO4+ (x = 0 – 4) and pentameric CaxMn5-xO5+ (x = 0 – 4) cluster ions in the gas-phase is reported. To probe fundamental concepts of the water oxidation reaction and to aid the design of artificial water-splitting molecular catalysts the first step was the investigation of the reactivity of the tetrameric cluster ions towards D216O and H218O in an ion trap experiment under multi-collision conditions. These experiments reveal that all tetrameric clusters are capable of deprotonating multiple water molecules via hydroxylation of the cluster oxo-bridges. However, only the tetrameric cluster ion CaMn3O4+ is observed to mediate the oxidation of water via the liberation of hydrogen peroxide. Due to the long-term collaboration with Prof. U. Landman from the Georgia Institute of Technology, Atlanta, USA, he performed concurrent first-principle density functional theory calculations for the tetrameric cluster complex, CaMn3O4+, which provide a deeper insight into the deprotonation process as well as the oxidation reaction of the substrate water molecules. Furthermore, the calculations demonstrate important conceptual perceptions for the role of the calcium atom coordinated to the cluster ion to aid the design of artificial water splitting catalysts. As a next step the investigations have been further extended by trying to imitate the amino acid ligand environment of the natural oxygen-evolving complex in a simplified way in the gas-phase. For this reason, the reaction behavior of the tetrameric cluster ions CaxMn4-xO4+ (x = 0, 2 – 4) have been studied towards acetic acid in the octopole ion trap. These experiments revealed a strong tendency for decomposition of the acetic acid for all tetrameric complexes. For all tetrameric cluster ions, no statement can be made about the preference for one of the three reaction processes, decarboxylation, dehydration, or ketonization. For gaining a deeper insight into the reaction behavior of the inorganic cluster core in the natural photosystem II, an extension of the simplified ligand environment in the gas-phase was performed by adding acetic acid and D2O to the ion trap. The acetic acid decomposes completely but in contrary to the reactions with mere acetic acid, the D2O is able to push the reaction behavior of the clusters towards a specific reaction channel. As a consequence, by adding a mixture of acetic acid and D2O to the ion trap the ketonization process seems to be favored for the Ca2Mn2O4+ and the Ca4O4+ complexes whereas the dehydration process seems to be preferred by the Ca3MnO4+ complex. Furthermore, the charge transfer reaction appears for the Ca2Mn2O4+ and the Ca4O4+ cluster ions after a certain amount of acetic acid is added to the trap, in which D2O is also present, leading to the complete loss of the cluster and product signals. As a last step the reactivity experiments towards D216O and H218O in an octopole ion trap have been repeated with the pentameric cluster ions, CaxMn5-xO5+ (x = 0 – 4). As already discovered for the tetrameric clusters, all pentameric cluster ions are able to deprotonate the substrate water molecules via the hydroxylation of the cluster oxo-bridges. Furthermore, the pentameric cluster ions Ca3Mn2O5+, Ca2Mn3O5+, and CaMn4O5+ are observed to mediate the oxidation of water via the elimination of hydrogen peroxide. Additionally, kinetic traces have been recorded for the reaction of the CaMn4O5+ cluster ion towards D2O. In consideration of the obtained kinetic traces for this reaction and the thermodynamics of the hydrogen peroxide evolution it was possible to suggest several mechanisms for the formation and elimination of H2O2.