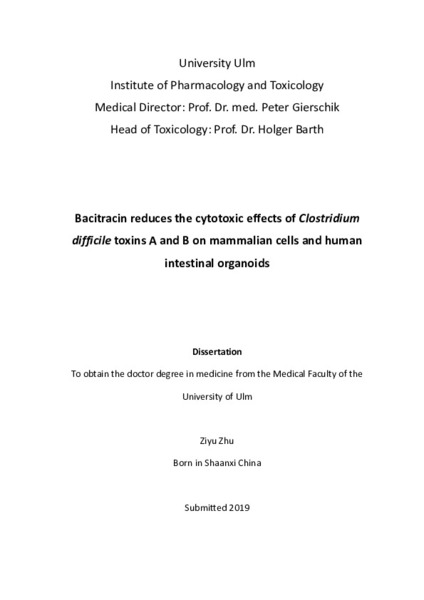 Clostridium difficile (C. difficile) produces three toxins, namely the binary Clostridium difficile transferase (CDT) and the large single-chain toxins Clostridium difficile toxin A (TcdA) and Clostridium difficile toxin B (TcdB). Among which, TcdA and TcdB are the main etiological factors causing the Clostridium difficile associated diseases (CDADs), with the severe symptoms such as pseudomembranous colitis (PMC) or inflammatory bowel disease (IBD). Nowadays, Clostridium difficile infection (CDI) is considered one of the most urgent threats to public health worldwide, particularly relevant in Western countries. Although there are some regular antibiotics (metronidazole, vancomycine and fidaxomycine and so on) available to treat or prevent the CDI, the usage of the antibiotics helps many strains to resist towards these therapies contrarily. Actually, research has demonstrated that the main problem of the disease are the toxins, which are not targeted by the antibiotics so far. Therefore, it is urgent to develop the efficient novel therapeutic options against CDI, including pharmacological toxin inhibitors. This current research project, which exactly deals with this topic, was inspired by the observation in the Barth group. It is observed that bacitracin prevents the intoxication of mammalian cells with various AB-type protein toxins through inhibiting the translocation process of the enzyme subunit of the toxins into the cytosol of target cells. The bacitracin used in this project is produced by Bacillus subtilis as a polypeptide antibiotic, which is the mixture of closely related compounds. It has antibacterial activity against Gram-positive bacteria. The efficient neutralizing activity of bacitracin towards TcdA/TcdB was surprising and proved as the foundation for the future clinically relevant research. The results of this thesis suggest that, bacitracin has no effect on the enzyme activity of TcdA/TcdB but specifically blocks the transportation process of the enzyme subunits into the target cells cytosol. Bacitracin protects human intestinal cells and organoids with slightly low doses following a concentration-dependent manner, and has no adverse effects by its own. This makes bacitracin a highly attractive candidate to develop the novel therapeutic options against CDI and CDADs, as it inhibits the combination of TcdA and TcdB, and also neutralizes the third toxin CDT.