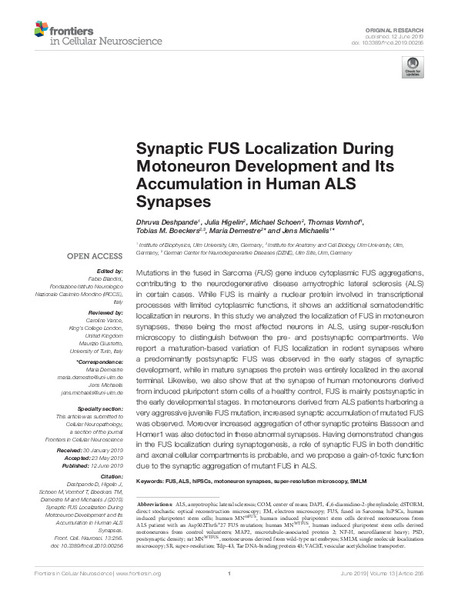 Mutations in the fused in Sarcoma (FUS) gene induce cytoplasmic FUS aggregations, contributing to the neurodegenerative disease amyotrophic lateral sclerosis (ALS) in certain cases. While FUS is mainly a nuclear protein involved in transcriptional processes with limited cytoplasmic functions, it shows an additional somatodendritic localization in neurons. In this study we analyzed the localization of FUS in motoneuron synapses, these being the most affected neurons in ALS, using super-resolution microscopy to distinguish between the pre- and postsynaptic compartments. We report a maturation-based variation of FUS localization in rodent synapses where a predominantly postsynaptic FUS was observed in the early stages of synaptic development, while in mature synapses the protein was entirely localized in the axonal terminal. Likewise, we also show that at the synapse of human motoneurons derived from induced pluripotent stem cells of a healthy control, FUS is mainly postsynaptic in the early developmental stages. In motoneurons derived from ALS patients harboring a very aggressive juvenile FUS mutation, increased synaptic accumulation of mutated FUS was observed. Moreover increased aggregation of other synaptic proteins Bassoon and Homer1 was also detected in these abnormal synapses. Having demonstrated changes in the FUS localization during synaptogenesis, a role of synaptic FUS in both dendritic and axonal cellular compartments is probable, and we propose a gain-of-toxic function due to the synaptic aggregation of mutant FUS in ALS.