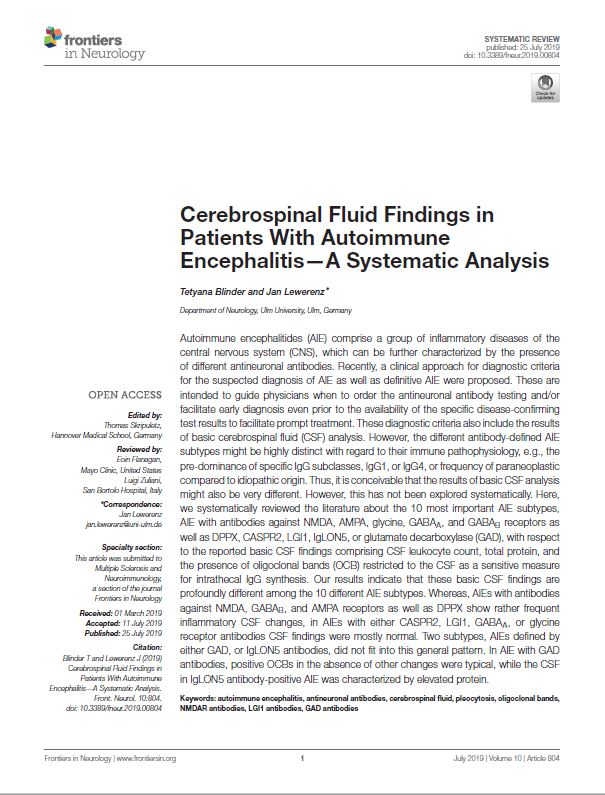 Autoimmune encephalitides (AIE) comprise a group of inflammatory diseases of the central nervous system (CNS), which can be further characterized by the presence of different antineuronal antibodies. Recently, a clinical approach for diagnostic criteria for the suspected diagnosis of AIE as well as definitive AIE were proposed. These are intended to guide physicians when to order the antineuronal antibody testing and/or facilitate early diagnosis even prior to the availability of the specific disease-confirming test results to facilitate prompt treatment. These diagnostic criteria also include the results of basic cerebrospinal fluid (CSF) analysis. However, the different antibody-defined AIE subtypes might be highly distinct with regard to their immune pathophysiology, e.g., the pre-dominance of specific IgG subclasses, IgG1, or IgG4, or frequency of paraneoplastic compared to idiopathic origin. Thus, it is conceivable that the results of basic CSF analysis might also be very different. However, this has not been explored systematically. Here, we systematically reviewed the literature about the 10 most important AIE subtypes, AIE with antibodies against NMDA, AMPA, glycine, GABAA, and GABAB receptors as well as DPPX, CASPR2, LGI1, IgLON5, or glutamate decarboxylase (GAD), with respect to the reported basic CSF findings comprising CSF leukocyte count, total protein, and the presence of oligoclonal bands (OCB) restricted to the CSF as a sensitive measure for intrathecal IgG synthesis. Our results indicate that these basic CSF findings are profoundly different among the 10 different AIE subtypes. Whereas, AIEs with antibodies against NMDA, GABAB, and AMPA receptors as well as DPPX show rather frequent inflammatory CSF changes, in AIEs with either CASPR2, LGI1, GABAA, or glycine receptor antibodies CSF findings were mostly normal. Two subtypes, AIEs defined by either GAD, or IgLON5 antibodies, did not fit into this general pattern. In AIE with GAD antibodies, positive OCBs in the absence of other changes were typical, while the CSF in IgLON5 antibody-positive AIE was characterized by elevated protein.