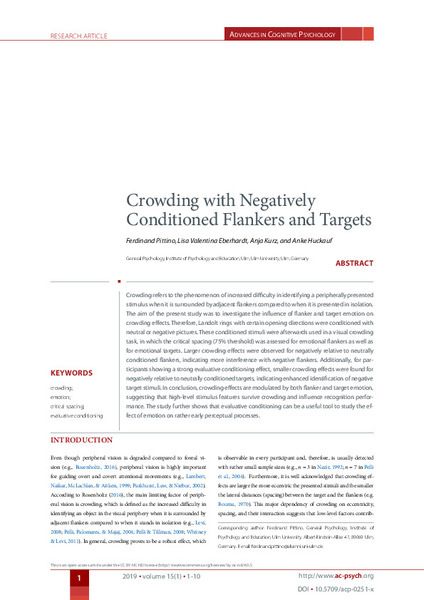 Crowding refers to the phenomenon of increased difficulty in identifying a peripherally presented stimulus when it is surrounded by adjacent flankers compared to when it is presented in isolation. The aim of the present study was to investigate the influence of flanker and target emotion on crowding effects. Therefore, Landolt rings with certain opening directions were conditioned with neutral or negative pictures. These conditioned stimuli were afterwards used in a visual crowding task, in which the critical spacing (75% threshold) was assessed for emotional flankers as well as for emotional targets. Larger crowding effects were observed for negatively relative to neutrally conditioned flankers, indicating more interference with negative flankers. Additionally, for participants showing a strong evaluative conditioning effect, smaller crowding effects were found for negatively relative to neutrally conditioned targets, indicating enhanced identification of negative target stimuli. In conclusion, crowding effects are modulated by both flanker and target emotion, suggesting that high-level stimulus features survive crowding and influence recognition performance. The study further shows that evaluative conditioning can be a useful tool to study the effect of emotion on rather early perceptual processes.

Except where otherwise noted, this item's license is described as CC-BY-NC-ND International 4.0