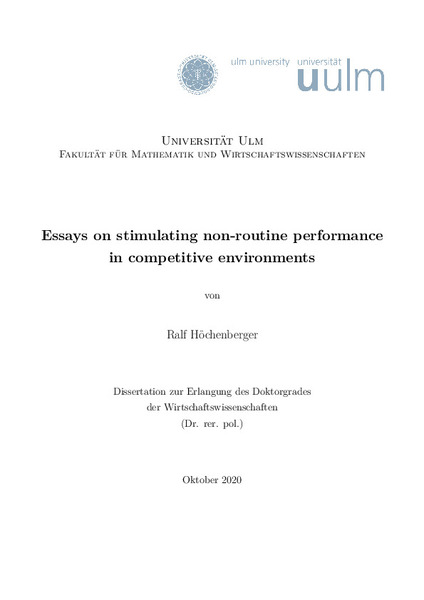 The automatization of standardized, algorithmic tasks (machine learning, artificial intelligence) leads to an increasing share of employees being involved in non-routine tasks. Hence, firms are in charge of understanding the proper incentivization of creativity. However, precise performance measures of innovative output are hard to gather, and decision makers often face wage budget constraints. Hence, firms frequently use different tournament schemes which only require ordinal information on performance ranks and design the prize structure such that the tournament with the higher winner prize involves a decrease in the loser prize by the same amount. How do employees react to such a bonus-malus system? Standard theory posits that risk-averse agents increase effort in the prize spread, even if the higher prize-spread involves a lower loser prize. This thesis develops an alternative model with a utility function being non-separable between prize and effort costs and derives effort reactions. The model yields the more intuitive result that sufficiently risk-averse agents decrease effort, whereas the incentive works for agents being less risk-averse. Utilizing a lab experiment with two different tournaments, two different creative tasks and random assignment of participants, I find support for this moderating role of risk aversion. Do employers then gain from letting employees self-select into preferred schemes? I predict and find in another lab experiment, that more risk-averse participants more likely self-select into the low-spread tournament, whereas less risk-averse participants more likely choose the high-spread tournament. Furthermore, I show that the moderating role of risk aversion leads to a higher mean performance in the self-selection treatments compared to the random assigned treatments. This result cannot be explained by higher mean abilities, as they are identical in both treatment groups.