Role of the terminal complement complex in intervertebral disc degeneration 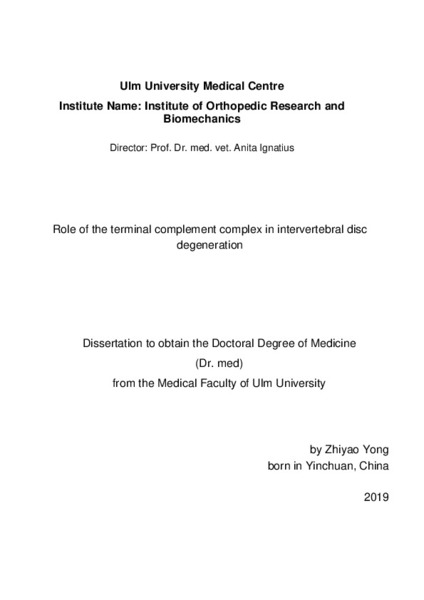 Disc degeneration (DD) can be noticed in most patients with low back pain, and therefore has high clinical relevance. Inflammation is known to contribute to DD, but there is limited knowledge regarding a possible involvement of the innate immune system, namely of the complement system. The formation of terminal complement complex (TCC), an activation product of the complement system, was previously identified in human herniated discs; however, there is limited knowledge regarding the involvement of complement activation and TCC formation in the patho mechanism of DD. Taken this, this work focused three major topics. First, it was performed a comprehensive study on the identification and localization of TCC and its inhibitor CD59 in different regions of human disc tissues collected from different donor groups: adolescent idiopathic scoliosis (AIS) and DD patients, and age- matched Young and Elder heathy donors, with ethical approval and informed consent. In the second part, possible correlations between TCC and CD59 positivity with donor age, detailed pathology and degree of DD (Modic changes, Pfirrmann grade) were also evaluated. The third part of this work focused on investigation how the stimulation of TCC deposition can be influenced by different molecules known to play a role in DD. In order to investigate the profile of TCC deposition and CD59 production on human disc tissues, macroscopically separated nucleus pulposus (NP), annulus fibrosus (AF) and endplate (EP) tissues were prepared for histology and, if possible, cell isolation. TCC deposition and CD59 production were investigated by IHC. Isolated cells and tissue explants were also analyzed for TCC deposition and CD59 production after stimulation with medium containing human serum alone (HS), or supplemented with IL-1b, cathepsin-D (CTSD) or Zymosan. This research suggests that complement system activation and TCC formation can be detected in disc tissue of not only DD patients, but in healthy disc tissue as well. While the high positivity for TCC and CD59 in DD patients seems to correlate with the degree of degeneration, whereas in the EP of Young healthy donors a negative correlation was found between TCC deposition and the age of the donors, which may be explained by developmental processes that are commonly very active in young children and then decrease with age, similarly to what was previously shown for endochondral bone development. Interestingly, CD59 positivity in both DD group and AIS also showed a negative correlation with the age of the patients. Moreover, although no differences were found between AF, NP or EP cells from AIS and DD patients, the in vitro data suggested that the TCC formation can be induced in presence of human serum, especially if the cells are kept in their native tissue. Interestingly, the presence of a pro-inflammatory environment (IL-1b stimulation) contributed to less TCC formation in AF and EP, but not in NP cells. Moreover, TCC formation was shown to be further triggered by CTSD, an important player in OA, but poorly described in DD. Overall, these findings indicate a possible functional relevance of IL-1b and CTSD in the modulation of TCC formation. Further studies are needed to support the therapeutic potential for targeting the complement system, namely TCC formation, to prevent further IVD cell death and tissue degeneration.