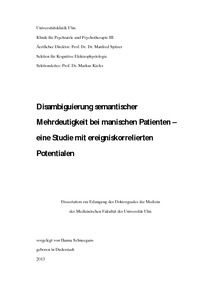 This study aimed at detecting differences in basic cognitive functions in patients with bipolar disorder, as compared with healthy controls. It was hypothesized that a deficit in semantic inhibition, i.e. a pronounced difficulty to suppress contextually irrelevant word meanings, might account for some of the unique psychopathology in patients currently undergoing manic or hypomanic episodes, especially where peculiarities in speech are concerned. To test this, patients and matched controls were presented with word triplets, half of which contained a homograph as the middle word, and were asked to decide via button press if the words belonged to the same semantic field or not. The patients were hypothesized to perform more poorly in the condition containing homographs, as they were thought to execute less inhibitory control over contextually irrelevant homograph meanings. In addition, event-related potentials were recorded during the task, aiming at detecting amplitude differences in the N2 after homograph presentation (which is known to be sensitive to inhibitory demands) and in the N400 (which is well established as a correlate of semantic integration) after presentation of word 3, to quantify the extent to which integration of the contextually appropriate homograph meaning and the rejection of the inappropriate word meaning had occurred. While there was no significant difference in homograph processing between patients and controls in terms of behavioural data, both N2 and N400 amplitudes differed significantly between groups, possibly reflecting decisive alterations in language processing in bipolar patients.