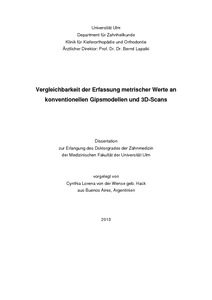 The aim of this study was to compare the traditional method for measuring mesial-distal tooth widths on plaster casts using a vernier caliper with a newer measuring technique based on virtual 3D models regarding accuracy and speed. Furthermore, the validity of the prediction tables of Berendonk and Moyers was tested. The individual mesial-distal tooth widths were measured on 55 blinded sets of plaster casts and their corresponding digital models, which were obtained by 3D scanning using a white-light scanner (d-Station3D; Breuckmann, D-Meersburg). Three examiners with different degrees of education in orthodontics performed the measurement of the teeth 6-6 in each jaw. Measurements were repeated three times in a randomized sequence using OnyxCeph3TM analysis software (Image Instruments, D-Chemnitz) and a dental vernier caliper. The operator time needed to complete each set of measurements was recorded. The measured values were then held against the prognosis of both Berendonk and Moyers. The Bland-Altman analysis of all single values revealed no statistically significant difference between the caliper-based and the software-based measuring technique. The limits of agreement were found to be within the clinically acceptable range of ±0,5 mm, with a slight underestimation of the tooth widths when measured digitally (&#63483;=-0,02 mm). The variability of the results was observed to be associated with the qualification degree of the user. Both repeatability and reproducibility were clinically acceptable for the 2 examiners with the higher education level in orthodontics. Altogether, the digital method required less time. The predictions made by using the correlation tables of Berendonk and Moyers lead to an overestimation of the space requirements. The software-based measurement of mesial-distal tooth widths on 3D models can replace the traditional method. Regarding the prediction tables of Berendonk und Moyers, we recommend to search for more accurate options.