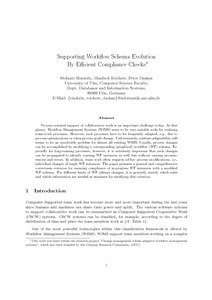 Process-oriented support of collaborative work is an important challenge today. At first glance, Workflow Management Systems (WfMS) seem to be very suitable tools for realizing team-work processes. However, such processes have to be frequently adapted, e.g., due to process optimizations or when process goals change. Unfortunately, runtime adaptability still seems to be an unsolvable problem for almost all existing WfMS. Usually, process changes can be accomplished by modifying a corresponding (graphical) workflow (WF) schema. Especially for long-running processes, however, it is extremely important that such changes can be propagated to already running WF instances as well, but without causing inconsistencies and errors. In addition, team work often requires ad-hoc process modifications, i.e., individual changes of single WF instances. The paper presents a general and comprehensive correctness criterion for ensuring compliance of in-progress WF instances with a modified WF schema. For different kinds of WF schema changes, it is precisely stated, which rules and which information are needed at mininum for satisfying this criterion.