Unusual echolocation behaviour of the common sword-nosed bat Lonchorhina aurita: an adaptation to aerial insectivory in a phyllostomid bat? 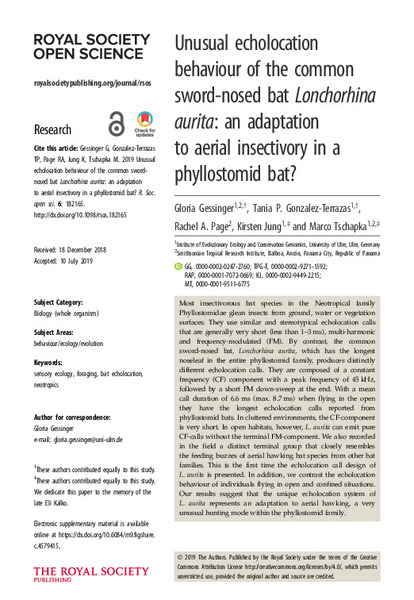 Most insectivorous bat species in the Neotropical family Phyllostomidae glean insects from ground, water or vegetation surfaces. They use similar and stereotypical echolocation calls that are generally very short (less than 1–3 ms), multi-harmonic and frequency-modulated (FM). By contrast, the common sword-nosed bat, Lonchorhina aurita, which has the longest noseleaf in the entire phyllostomid family, produces distinctly different echolocation calls. They are composed of a constant frequency (CF) component with a peak frequency of 45 kHz, followed by a short FM down-sweep at the end. With a mean call duration of 6.6 ms (max. 8.7 ms) when flying in the open they have the longest echolocation calls reported from phyllostomid bats. In cluttered environments, the CF-component is very short. In open habitats, however, L. aurita can emit pure CF-calls without the terminal FM-component. We also recorded in the field a distinct terminal group that closely resembles the feeding buzzes of aerial hawking bat species from other bat families. This is the first time the echolocation call design of L. aurita is presented. In addition, we contrast the echolocation behaviour of individuals flying in open and confined situations. Our results suggest that the unique echolocation system of L. aurita represents an adaptation to aerial hawking, a very unusual hunting mode within the phyllostomid family.