Spreading of amyloid, tau, and microvascular pathology in Alzheimer´s disease: findings from neuropathological and neuroimaging studies 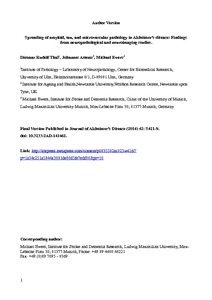 Primary pathologies including amyloid-beta (Abeta) plaques and neurofibrillary tangles (NFT) develop many years before the onset of dementia symptoms in Alzheimer’s disease (AD). Age-related small vessel disease (SVD) is common in elderly subjects and may contribute to the clinical syndrome of AD. Each type of pathology shows a specific spatio-temporal sequence of spreading in the brain. Here we review neuropathological and neuroimaging findings (PET tracers of Abeta and NFT, MRI markers of SVD) to assess whether staging of these primary pathologies is useful to predict clinical symptoms in AD. On the basis of neuropathological data, early stages of Abeta plaque and NFT pathology distribution occur in preclinical AD, but advanced stages with spreading into further brain regions are associated with dementia symptoms. Amyloid PET presumably detects Abeta in advanced neuropathological Abeta stages, and increased global amyloid PET uptake is associated with clinical worsening in mild cognitive impairment (MCI) and possibly elderly cognitive normal subjects. Tau PET may provide additional predictive value by detecting NFT in the allocortex. There is weak evidence that SVD is related to amyloid or NFT pathology. Global volume of MRI-assessed white matter hyperintensities (WMH) contribute independently from biomarker levels of Abeta to cognitive decline. Regional differences of the effect of WMH on cognition have been demonstrated but are not yet established as a biomarker in AD. Accordingly, biomarkers for amyloid and tau-pathology allow a distinction between early and advanced stages of AD and potentially relevant vascular co-pathologies but a subgroup of pathologically identified preclinical AD cases is not identified by the current biomarkers.