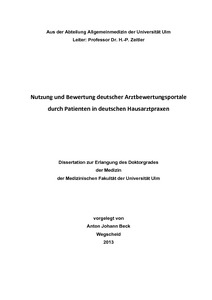 Background: Physician rating sites (PRS) are more and more becoming the subject of discussion in the medical lay and specialised press. They are partially imputed with great importance. Therefore it should be examined whether patients who visit a general practitioner practice are aware of PRS, use them and how they evaluate them. Method: One hundred questionnaires (QNRs) were sent in the period from 18 July-19 August 2012 to 21 teaching and selected practices in Germany by means of a general medicine list server. They were distributed to patients in the practices, collected again and sent anonymised to the director of studies. The QNRs collected socio-demographic data and contained questions regarding knowledge, use and evaluation of the 15 most frequently used PRS in Germany. In addition, the reasons for the choice of general practitioner, the previous duration of care though the general practitioner (GP) as well as basic data were queried from practice owners. The data obtained were evaluated by means of descriptive statistics in SPSS. Results: Out of 2,100 QNRs, 1,413 were returned (67 %), and 1,356 (65 %) were evaluable. 60 % of patients selected their GP through a recommendation from family, friends and acquaintances. Less than 1 % of those polled found their GP through a PRS. The vast majority of patients (72 %) indicated not being aware of any PRS. Women used PRS significantly more frequently than men (27 % vs. 19 %). The higher the achieved level of education was, the more frequently PRS were used. 44 % of those polled from large cities used PRS, compared to only 20 % from rural areas. Conclusion: Most patients are not aware of any PRS or whether they play an essential role neither for the choice of a GP nor as a source of information. However, a change is shown with regard to communication, i.e. recommendations from the Internet and through PRS are gaining importance, particularly for younger patients. There is also a clear city/countryside divide.