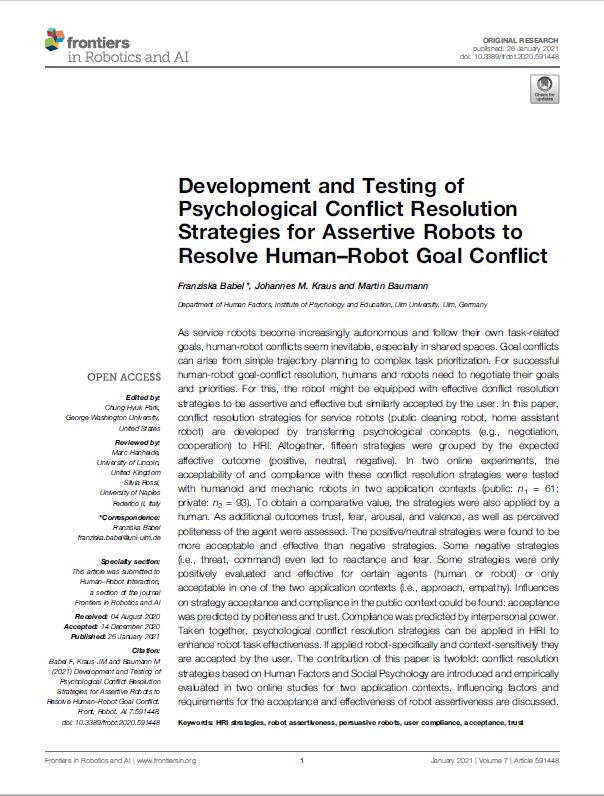 As service robots become increasingly autonomous and follow their own task-related goals, human-robot conflicts seem inevitable, especially in shared spaces. Goal conflicts can arise from simple trajectory planning to complex task prioritization. For successful human-robot goal-conflict resolution, humans and robots need to negotiate their goals and priorities. For this, the robot might be equipped with effective conflict resolution strategies to be assertive and effective but similarly accepted by the user. In this paper, conflict resolution strategies for service robots (public cleaning robot, home assistant robot) are developed by transferring psychological concepts (e.g., negotiation, cooperation) to HRI. Altogether, fifteen strategies were grouped by the expected affective outcome (positive, neutral, negative). In two online experiments, the acceptability of and compliance with these conflict resolution strategies were tested with humanoid and mechanic robots in two application contexts (public: n1 = 61; private: n2 = 93). To obtain a comparative value, the strategies were also applied by a human. As additional outcomes trust, fear, arousal, and valence, as well as perceived politeness of the agent were assessed. The positive/neutral strategies were found to be more acceptable and effective than negative strategies. Some negative strategies (i.e., threat, command) even led to reactance and fear. Some strategies were only positively evaluated and effective for certain agents (human or robot) or only acceptable in one of the two application contexts (i.e., approach, empathy). Influences on strategy acceptance and compliance in the public context could be found: acceptance was predicted by politeness and trust. Compliance was predicted by interpersonal power. Taken together, psychological conflict resolution strategies can be applied in HRI to enhance robot task effectiveness. If applied robot-specifically and context-sensitively they are accepted by the user. The contribution of this paper is twofold: conflict resolution strategies based on Human Factors and Social Psychology are introduced and empirically evaluated in two online studies for two application contexts. Influencing factors and requirements for the acceptance and effectiveness of robot assertiveness are discussed.