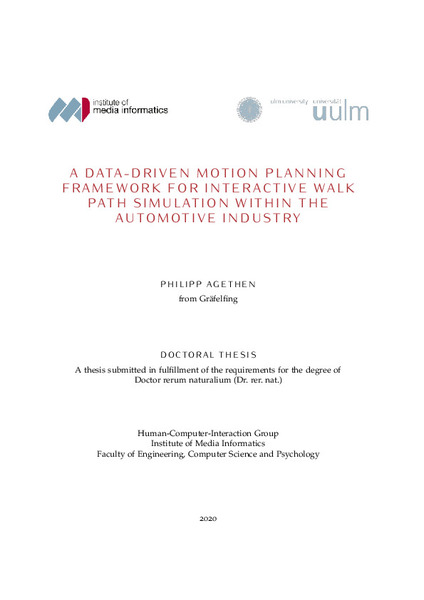 Walking is one of the most ordinarily used motion and ubiquitous in our everyday lives. Owing to its evident significance, locomotion is subject to a wide-ranging field of research, spanning various disciplines, applications and level of detail. An area, which in this context has recently attracted particular attention, is the synthesis of human motion and motion planning. This includes the generation of center of mass trajectories in a bird’s eye view. Even though use-cases encompassing walk paths differ in their respective scope, the ability to realistically predict real-world observations has shown to be decisive. For instance, it is of significant importance for the simulation of evacuation scenarios to accurately model pedestrian dynamics and local interactions. A high prediction quality is equally important when planning walking trajectories of assembly operators. Especially for the latter, however, related work reveals limitations in terms of motion realism. This is accompanied by a lack of validation approaches, ensuring the validity of artificial walk paths. In the automotive industry, these shortcomings are confronted with an increasing demand for simulation methods, which is caused by disruptive changes. Particularly the significant extension of product portfolios in combination with extensive individualization options induce additional efforts for production planning departments. This paradigm shift also affects the process of walk path planning, whose methods are becoming increasingly inaccurate and inefficient. To cope with both challenges, this thesis proposes a framework, which allows to realistically plan and validate walk paths. The so-called interactive walk path simulation concept can be regarded as symbiosis of immersive virtual reality and motion planning in form of a feedback-loop. As the user can easily investigate and reenact synthetic motions in true-to-scale, on the one hand side, invalid simulation outcomes can reliably be detected - and corrected. On the other hand side, motion planning algorithms enable the examination of different process-variants and the consideration of the probabilistic nature of human motion. In essence, it is possible to reinforce the individual advantages and compensate the drawbacks of both groups. To implement the generic concept for the use-case of automotive production planning, the situation in assembly lines is grasped in a first step. To this matter, a marker-less motion capture system is presented, which facilitates the investigation of walk paths in industrial environments. Two conducted on-site case-studies reveal that especially the consideration of operator-drift and probabilistic nature of the human locomotor system is essential. Incorporating these findings, two data-driven motion planning algorithms are presented, constituting the backbone of this thesis. By utilizing probabilistic motion models, which take into account the intrinsic variability, both approaches enable the generation of statistically distributed motion corridors. Even though the algorithms are nearly exclusively generating suitable results, it is nevertheless crucial to review the synthesized walk paths in virtual reality with respect to their validity. In this context, effects need to be explicitly taken into account, which are induced by the use of head-mounted displays. Therefore, several experiments are conducted, analyzing the behavioral disparity between human locomotion, being performed without any equipment and in virtual reality. Based on the obtained knowledge, compensation strategies are eventually presented, which counterbalance the use of the immersive visualization technique in the feedback loop. The framework and all of its introduced components are evaluated through multiple case studies, systematically assessing their applicability to overcome the identified drawbacks. Unifying all concepts, algorithms, technical and conceptual explorations, as well as qualitative and empirical research, it can be concluded, that the presented interactive walk path simulation framework significantly increases resemblance of artificial center of mass trajectories to reality. Throughout this thesis, special care has been given to generalizability and to a generic design, so that contributions can be applied to a wide range of domains beyond process engineering.