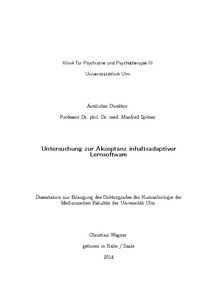 BACKGROUND: According to former studies, children experience orientation problems while using the internet, which hinder exploration of new content: The children use only a few known websites. The innate needs competence and autonomy could support the exploration behavior (self-determination theory). AIMS: A new concept for adaptive learning systems was developed which enables content adaption. The learning material is chosen during the system usage to match the individual interests of the user. A prototype of the content adaption was implemented with the possibilities of the semantic web. SAMPLE: The prototype was used in several studies, especially with 52 students (5th grade) of a secondary school in Ulm, Germany. The general acceptance of the prototype was measured by a survey and the user log files were analyzed. RESULTS/CONCLUSION: 1. The students showed a general acceptance of the prototype and explored several different topics while using it. 2. For the students competence and autonomy was very important and the prototype supported these needs. 3. In a cooperation with 21 German teachers the requirements of this group towards a content adaption system were analyzed - the teachers want the content adaption specific to their current subject. This requirement contradicts to the autonomy idea of the concept. 4. Four possible application areas could be identified: (i) students using the system in school, (ii) students using the system at home, (iii) a mobile implementation for students and a broader audience (e.g. adults) and (iv) a specific implementation for experts (e.g. medical scientists or biologists). Further studies could include effect analysis, comparisons to other e-learning systems and variants of the prototype.