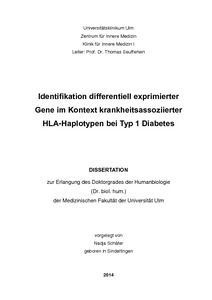 The major elements associated with the autoimmune disease Type 1 Diabetes (T1D) are the highly polymorphic genes of the human leukocyte antigen (HLA), which are located on chromosome 6p21.3. The major risk of HLA encoded susceptibility to T1D is mediated by the alleles of the HLA-class-II-genes HLA-DRB1, HLA-DQA1 and HLA-DQB1. Predisposing as well as protective HLA-haplotypes have been identified. The protective HLA-haplotype DR2-DQ6.2 dominates over the predisposing HLA-haplotypes DR4-DQ8 and DR3-DQ2, because individuals heterozygous for the protective and one of these predisposing haplotypes have a significantly reduced disease risk. In this study expression levels of HLA-class-II-genes that are involved in developing T1D were determined. Therefore, lymphoblastoid B cell lines (B-LCLs) of probands with different HLA-constellations, which are differently associated with T1D, were used. We demonstrate that expression levels of HLA-DQA1 and HLA-DQB1 differ in B-LCLs of probands with different HLA-constellations. Furthermore, we found differences in expression of distinct alleles of HLA-DQA1 and HLA-DQB1 in heterozygous probands carrying different HLA-haplotypes. These results indicate that in addition to structural differences in HLA-class-II molecules, quantitative differences could be critical for developing T1D. Furthermore, since microRNAs (miRNAs) are important negative-regulators for gene expression, they are likely to contribute to regulating HLA-class-II genes. In this study we show that some miRNAs were expressed differently between probands with distinct HLA-constellations. This result could be an evidence for the regulatory role of miRNAs in HLA-class-II expression. In summary, our data have strengthened previous findings of allelic differences in expression of HLA-DQA1 and HLA-DQB1 genes. Our findings suggest a dose dependent effect of HLA-class-II molecules in the context of developing T1D.