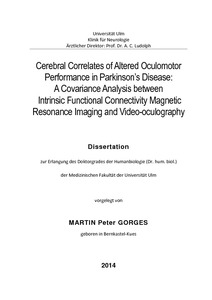 Objective: Cognitive decline is a burdensome non-motor symptom experienced by Parkinson´s disease (PD) patients; another non-motor aspect is disturbed eye movement control which again underlies by cortical control. This bimodal study aimed at investigating both the oculomotor performance and intrinsic functional connectivity (iFC) of the brain in PD depending on the patients’ cognitive status as well as possible relationships between oculomotor dysfunctions and iFC. Methods: Video-oculography (EyeLink® I) and iFCMRI (Siemens Magnetom Allegra, 3T) data from three groups of subjects were used for the analysis: Cognitively unimpaired (N = 14), cognitively impaired PD patients (N = 17), each classified according to detailed neuropsychological assessment, and age-matched healthy controls (N = 22). Results: Oculomotor performance depended on the cognitive status only in few aspects (inhibition control, saccadic intrusion rate). With the exception of the cerebellar and visuospatial intrinsic connectivity networks, the other networks including default mode, frontoparietal control, dorsal and ventral attention, motor, basalganglia-thalamic and brainstem were significantly altered in that iFC was increased in cognitively unimpaired and decreased in cognitively impaired patients (each compared with controls). The covariance analysis revealed significant correlations in cortical, limbic and brainstem networks, i.e. the worse the oculomotor performance in PD was, the more the regional iFC in cortical, limbic, thalamic, cerebellar, and brainstem areas was decreased. Conclusion: The increase in iFC might be the initial manifestation of altered brain function as adaptive (compensatory) changes preceding cognitive deficits. A loss of functional connectivity may be attributed to the development of cognitive deficits in PD. Dysfunctional oculomotor control in PD seems to be primarily associated with executive deficits and was demonstrated to be linked to decreased functional networks.