Association of lung function with overall mortality is independent of inflammatory cardiac, and functional biomarkers in older adults: the ActiFE‑study 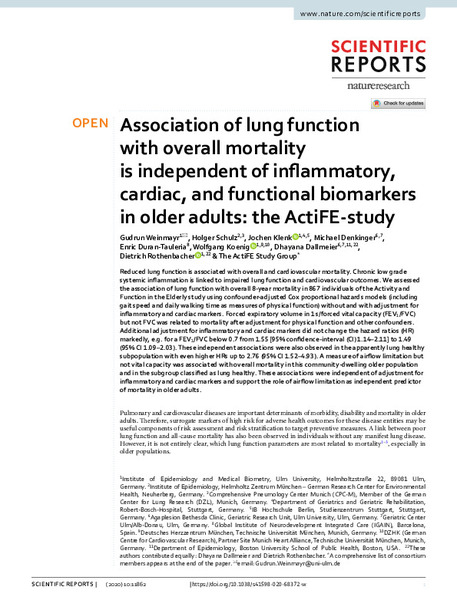 Reduced lung function is associated with overall and cardiovascular mortality. Chronic low grade systemic inflammation is linked to impaired lung function and cardiovascular outcomes. We assessed the association of lung function with overall 8-year mortality in 867 individuals of the Activity and Function in the Elderly study using confounder-adjusted Cox proportional hazards models (including gait speed and daily walking time as measures of physical function) without and with adjustment for inflammatory and cardiac markers. Forced expiratory volume in 1 s/forced vital capacity ( FEV1/FVC) but not FVC was related to mortality after adjustment for physical function and other confounders. Additional adjustment for inflammatory and cardiac markers did not change the hazard ratios (HR) markedly, e.g. for a FEV1/ FVC below 0.7 from 1.55 [95% confidence-interval (CI) 1.14–2.11] to 1.49 (95% CI 1.09–2.03). These independent associations were also observed in the apparently lung healthy subpopulation with even higher HRs up to 2.76 (95% CI 1.52–4.93). A measure of airflow limitation but not vital capacity was associated with overall mortality in this community-dwelling older population and in the subgroup classified as lung healthy. These associations were independent of adjustment for inflammatory and cardiac markers and support the role of airflow limitation as independent predictor of mortality in older adults.