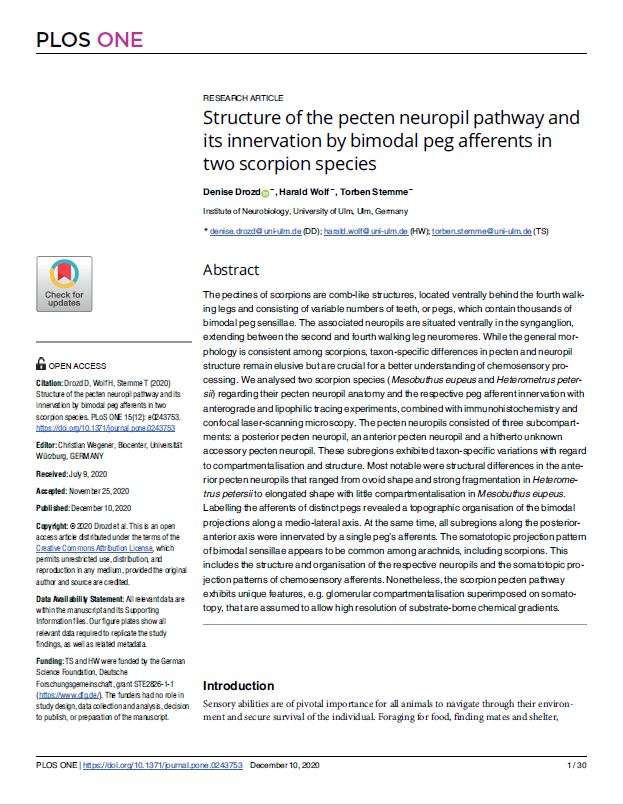 The pectines of scorpions are comb-like structures, located ventrally behind the fourth walking legs and consisting of variable numbers of teeth, or pegs, which contain thousands of bimodal peg sensillae. The associated neuropils are situated ventrally in the synganglion, extending between the second and fourth walking leg neuromeres. While the general morphology is consistent among scorpions, taxon-specific differences in pecten and neuropil structure remain elusive but are crucial for a better understanding of chemosensory processing. We analysed two scorpion species (Mesobuthus eupeus and Heterometrus petersii) regarding their pecten neuropil anatomy and the respective peg afferent innervation with anterograde and lipophilic tracing experiments, combined with immunohistochemistry and confocal laser-scanning microscopy. The pecten neuropils consisted of three subcompartments: a posterior pecten neuropil, an anterior pecten neuropil and a hitherto unknown accessory pecten neuropil. These subregions exhibited taxon-specific variations with regard to compartmentalisation and structure. Most notable were structural differences in the anterior pecten neuropils that ranged from ovoid shape and strong fragmentation in Heterometrus petersii to elongated shape with little compartmentalisation in Mesobuthus eupeus. Labelling the afferents of distinct pegs revealed a topographic organisation of the bimodal projections along a medio-lateral axis. At the same time, all subregions along the posterioranterior axis were innervated by a single peg’s afferents. The somatotopic projection pattern of bimodal sensillae appears to be common among arachnids, including scorpions. This includes the structure and organisation of the respective neuropils and the somatotopic projection patterns of chemosensory afferents. Nonetheless, the scorpion pecten pathway exhibits unique features, e.g. glomerular compartmentalisation superimposed on somatotopy, that are assumed to allow high resolution of substrate-borne chemical gradients.