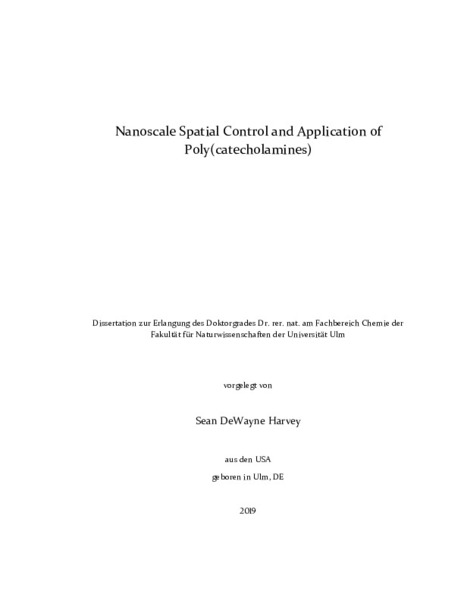 Inspired by the adhesive foot proteins of Mussels, polydopamine (PDA) has earned great acclaim as a multifunctional coating in the past decade. Its simplicity in formation, ability to adhere to virtually any surface, unique physicochemical properties, biocompatibility and tailorability through post-functionalization makes PDA an easy approach for fabrication of novel materials used in all fields of research from energy to environmental to biomedical. Nevertheless, PDA has thus far failed to bring about the promised revolution in material science. This may be attributed, in part, to the complex and heterogeneous polymerization mechanism, which is difficult to control, making it challenging to create defined structures e.g. at the nanoscale. New techniques and methods that can provide nanoscale control of the polymerization of dopamine to PDA are needed to achieve the full realization of PDA-based materials. In this dissertation, two new methods are presented that accomplish nanoscale synthetic control of PDA both in bulk solution and on defined scaffold. First, exploiting the reactivity of oxidized intermediates formed during the polymerization of dopamine towards Michael addition and Schiff base reactions, bis-amine-terminated polyethylene glycol (PEG) is copolymerized with dopamine to restrain the polymerization. Hence, PDA PEG cross-linked copolymer (PDA-PEG) nanoparticles with a size of less than 50 nm are prepared in a convenient one-step procedure in aqueous solution. The nanoparticles are stable in buffer solution and exhibit no sedimentation after several weeks. Chemical functionalization was demonstrated by the attachment of amine reactive fluorescent dyes. The PDA-PEG nanoparticles revealed efficient cellular uptake via endocytosis and high cytocompatibility, thus rendering them attractive candidates for cell imaging or for drug delivery applications. Next, the sequence defined spatial programming provided by DNA origami technology was used to fabricate anisotropic PDA nanoarchitectures with nanometer resolution. DNA origami nanotechnology offers systematic design of a large variety of defined DNA nanostructures by self-assembling long scaffold DNA and shorter staple DNA sequences with each DNA staple sequence encoding a specific position that can be precisely modified. Specific staple strands were modified with guanine rich tail sequences yielding DNA origami tiles with G-quadruplex (G4) motifs at defined locations. The G4 motifs were converted to dopamine polymerizing catalytic centers through binding of hemin. These DNA origami decorated with multiple G4 motifs at chosen locations were utilized to control the shape and size of PDA formation at the nanometer scale. Using this technique, we were able to generate various anisotropic PDA nanostructures (i.e. spot, lines, and cross) on the DNA origami tiles. Furthermore, the PDA nanostructures could be released from DNA origami templates by short exposure to acidic medium. Thus, DNA origami was successfully demonstrated as a new nanotechnology to fabricate anisotropic PDA nanoarchitectures with distinct shapes with broad applicability. In addition to PDA, other polycatecholamines can be generated from their respective monomers using the same methods. The distinct functional side groups of each monomer can endow the resulting polycatecholamines with enhanced functionality over that of PDA. For example, the carboxylic acid group of L-DOPA bestows poly(L-DOPA) with a greater hydrophilicity compared to PDA. In the final contribution, this aspect is used to increase the colloidal stability of fluorescent nanodiamonds (fNDs) and produce a theranostic poly(L-DOPA)-fND system. FNDs are unique carbon-based nanomaterials due to their outstanding optical and magnetic properties. However, realization of the full potential of fNDs is often limited by their tendency to aggregate strongly in aqueous solutions. This limitation is addressed by coating fNDs with a thin shell of poly(L-DOPA) increasing the aqueous stability of fNDs while simultaneously enhancing their therapeutic potential. The poly(L-DOPA)-fND hybrid materials are shown to retain the optical and magnetic properties of the original fNDs. Furthermore, the protein Transferrin and indocyanine green were loaded on the poly(L-DOPA) shell to enhance cell uptake and provide an amplified photothermal effect, respectively. The theranostic potential of the integrated biohybrid construct is demonstrated by rapid death of cancer cells when irradiated with a low power IR lamp (~90 mW cm-2). In summary, two methods are presented in this thesis that provide new avenues to control the polymerization of PDA at the nanoscale to achieve globular, fibrillary and anisotropic structures and applications have been highlighted. In addition, the potential to expand the versatility of PDA-like coatings using poly(L-DOPA) is presented.