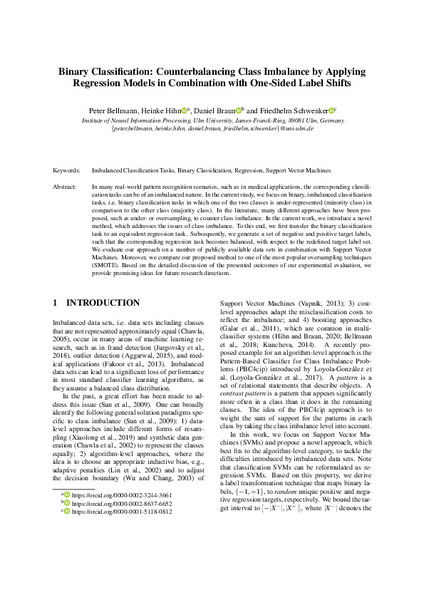 In many real-world pattern recognition scenarios, such as in medical applications, the corresponding classification tasks can be of an imbalanced nature. In the current study, we focus on binary, imbalanced classification tasks, i.e.~binary classification tasks in which one of the two classes is under-represented (minority class) in comparison to the other class (majority class). In the literature, many different approaches have been proposed, such as under- or oversampling, to counter class imbalance. In the current work, we introduce a novel method, which addresses the issues of class imbalance. To this end, we first transfer the binary classification task to an equivalent regression task. Subsequently, we generate a set of negative and positive target labels, such that the corresponding regression task becomes balanced, with respect to the redefined target label set. We evaluate our approach on a number of publicly available data sets in combination with Support Vector Machines. Moreover, we compare our proposed method to one of the most popular oversampling techniques (SMOTE). Based on the detailed discussion of the presented outcomes of our experimental evaluation, we provide promising ideas for future research directions.