Histaminergic interneurons in the ventral nerve cord: assessment of their value for euarthropod phylogeny 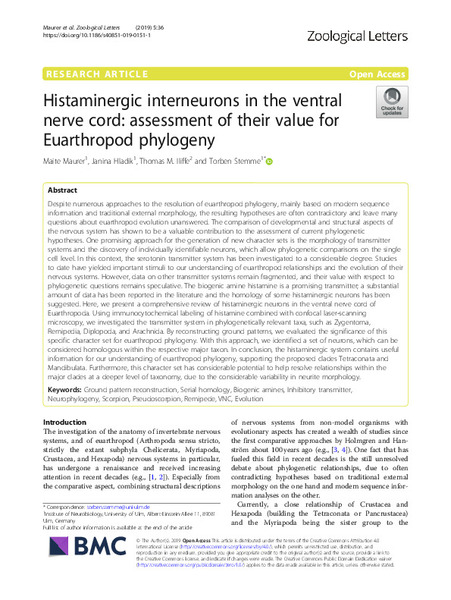 Despite numerous approaches to the resolution of euarthropod phylogeny, mainly based on modern sequence information and traditional external morphology, the resulting hypotheses are often contradictory and leave many questions about euarthropod evolution unanswered. The comparison of developmental and structural aspects of the nervous system has shown to be a valuable contribution to the assessment of current phylogenetic hypotheses. One promising approach for the generation of new character sets is the morphology of transmitter systems and the discovery of individually identifiable neurons, which allow phylogenetic comparisons on the single cell level. In this context, the serotonin transmitter system has been investigated to a considerable degree. Studies to date have yielded important stimuli to our understanding of euarthropod relationships and the evolution of their nervous systems. However, data on other transmitter systems remain fragmented, and their value with respect to phylogenetic questions remains speculative. The biogenic amine histamine is a promising transmitter; a substantial amount of data has been reported in the literature and the homology of some histaminergic neurons has been suggested. Here, we present a comprehensive review of histaminergic neurons in the ventral nerve cord of Euarthropoda. Using immunocytochemical labeling of histamine combined with confocal laser-scanning microscopy, we investigated the transmitter system in phylogenetically relevant taxa, such as Zygentoma, Remipedia, Diplopoda, and Arachnida. By reconstructing ground patterns, we evaluated the significance of this specific character set for euarthropod phylogeny. With this approach, we identified a set of neurons, which can be considered homologous within the respective major taxon. In conclusion, the histaminergic system contains useful information for our understanding of euarthropod phylogeny, supporting the proposed clades Tetraconata and Mandibulata. Furthermore, this character set has considerable potential to help resolve relationships within the major clades at a deeper level of taxonomy, due to the considerable variability in neurite morphology.