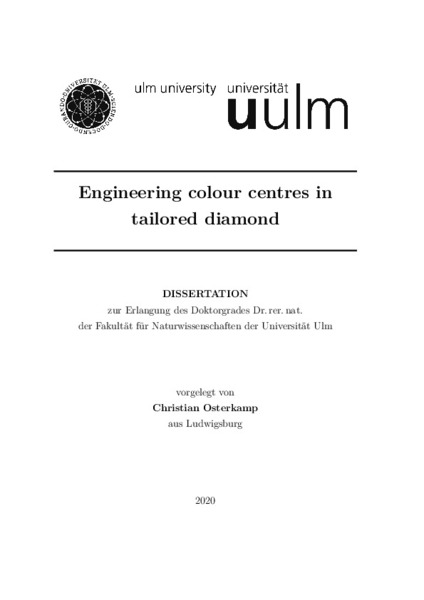 When the word diamond comes up, the majority of people thinks about engagement rings or gemstones. In fact, it is additionally, one of the most promising host materials for the implementation of advanced technology, exploiting the nature of quantum physics. Such quantum technologies have disruptive potential, ones the quantum effects can be applied in macroscopic, commercial products. The nitrogen-vacancy (NV) centre in diamond is a promising candidate to perform such tasks in the fields of quantum computation, quantum cryptography or metrology. Especially in the field of quantum sensing, the NV sensor impresses with nano-scale spatial resolution paired with high sensitivity. The electronic spin of the atomic-sized point defect can be initialised, manipulated and read-out at ambient conditions and coherence lifetimes are comparably long. Diamond magnetometers based on negatively charged NV centres have shown to be very attractive, and the sensitivity goes down to the single-atom level. In order to exploit such a high sensitivity level for sensing prospects, in this thesis, the NV centres are fabricated well confined in a certain distance to the diamond surface, since the detectable field usually decays with the third power of the distance between sensor and target. The surface depicts a fracture of the spin wise protecting diamond lattice and charge fluctuations affect the stability of NV centres, which are overcome by diamond surface termination. In order to improve the sensitivity further, the sensor density, measurement contrast and interaction time are increased. The nitrogen doping technique, which is applied during a plasma-enhanced chemical vapour deposition (PECVD) diamond growth process is used to fabricate NV centre ensembles aligned along one diamond crystal axis, thereby improving the measurement contrast by a factor up to four. The interaction time limiting spin bath is analysed using the sensor capabilities of the NVs, which leads to enhanced growth strategies and the fabrication of sensitivity optimised NV centre ensembles for magnetometry applications.