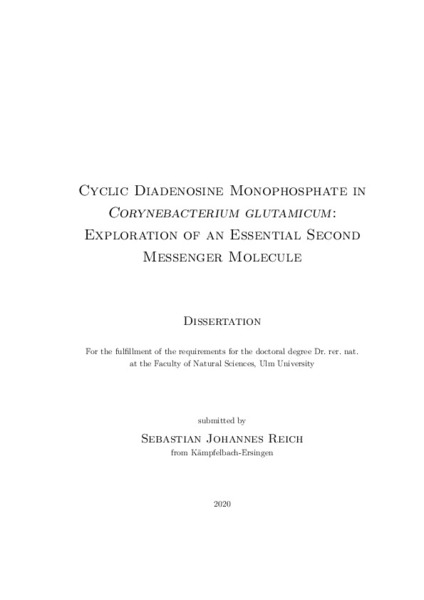 The second messenger molecule cyclic diadenosine monophosphate (c-di-AMP) has been reported to be mainly involved in control of potassium homeostasis and osmoprotection in Firmicutes. Furthermore, c-di-AMP is important for virulence of pathogenic bacteria such as Listeria monocytogenes or Mycobacterium tuberculosis. Corynebacterium glutamicum is a Gram-positive model organism known for its wide use in amino acid production. In the present work, different aspects of c-di-AMP signaling in C. glutamicum were investigated to extend the knowledge on regulatory mechanisms of this molecule in Actinobacteria. Cdi-AMP metabolism in C. glutamicum was found to be solely mediated by the diadenylate cyclase DisA and the c-di-AMP phosphodiesterase PdeA. Deletion of pdeA or overexpression of disA, although leading to remarkably increased internal c-di-AMP levels, was not detrimental for the organism at standard growth and several stress conditions. In contrast, a viable deletion mutant of disA could not be obtained, and plasmid-based overexpression of pdeA was only possible under tight transcriptional control by a theophylline-inducible riboswitch. Several approaches to analyze putative connections between c-di-AMP and ion homeostasis were conducted, however, no c-di-AMP-dependent physiological phenotypes were observed under these conditions. Thus, in contrast to Firmicutes, c-di-AMP seems not to be involved in these mechanisms in C. glutamicum. A CRISPR interference system for silencing of disA was used to further assess effects of low c-di-AMP levels and showed that the molecule was important during growth of C. glutamicum with amino acids/peptides, acetate and fructose, but not glucose, sucrose, myo-inositol or maltose as carbon sources. As acetate and fructose both result in a lower pentose phosphate pathway flux and expose the cell to increased oxidative stress compared to glucose, it was concluded that c-di-AMP might play a role in stress response under these conditions. In another part of this work, a putative riboswitch in front of the cell wall peptidase gene nlpC was characterized to act as an ’off’-switch upon c-di-AMP binding. The nlpC gene is the first of seven in an operon encoding proteins of various functions. It could be shown that riboswitch-mediated control did not affect transcription using reporter gene assays and real-time quantitative PCR, leading to the conclusion that the riboswitch solely controls nlpC translation but does not affect the remaining genes of the operon. In contrast to earlier characterized c-di-AMP riboswitches, which where shown to act via transcription termination by an intrinsic terminator structure, the nlpC-riboswitch therefore represents a novel class of translational c-di-AMP binding riboswitches.