Stigmatization is associated with increased PTSD risk after traumatic stress and diminished likelihood of spontaneous remission : a study with East-African conflict survivors 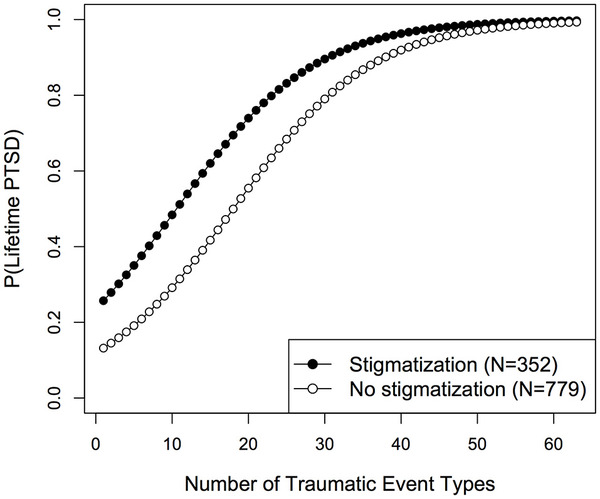 Studies in conflict population have repeatedly documented that the number of traumatic event types experienced (trauma load) increases the risk to develop posttraumatic stress disorder (PTSD) in a dose-dependent manner. Misconceptions about survivors' experiences and actions during the war, as well as mental health symptoms frequently lead to stigmatization by their own families and the community, which might render them even more vulnerable for PTSD development and prevent successful recovery. We therefore investigated whether stigmatization affects trauma-related psychopathology beyond the well-known effect of trauma load. The study sample comprised N = 1131 survivors of the rebel war led by the Lord's Resistance Army (LRA) in Northern Uganda, including a large proportion of formerly abducted individuals and child soldiers. We investigated how the experience of stigmatization affects PTSD risk and the likelihood of spontaneous remission, taking trauma load into account. Further, the association of stigmatization with treatment outcome was determined in a subsample of N = 284 individuals with PTSD who received trauma-focused psychotherapy. More than one third of the total sample, and almost two-thirds of the therapy subsample, reported experiences of stigmatization. The main reasons for stigmatization were related to an association with a rebel group (e.g., being called a rebel), followed by mental health problems/PTSD symptoms and HIV/AIDS. Stigmatization was strongly associated with a higher prevalence of lifetime and current PTSD, a diminished probability of spontaneous remission and higher PTSD symptoms before and after trauma-focused psychotherapy, beyond the effect of trauma load. In sum, our results support the assumption that stigmatization aggravates trauma-related psychopathology and impede symptom improvement. In post-conflict regions, community and family interventions which aim at reducing stigmatization and discrimination might therefore complement individual psychotherapy in order to allow survivors to recover and reintegrate into society.