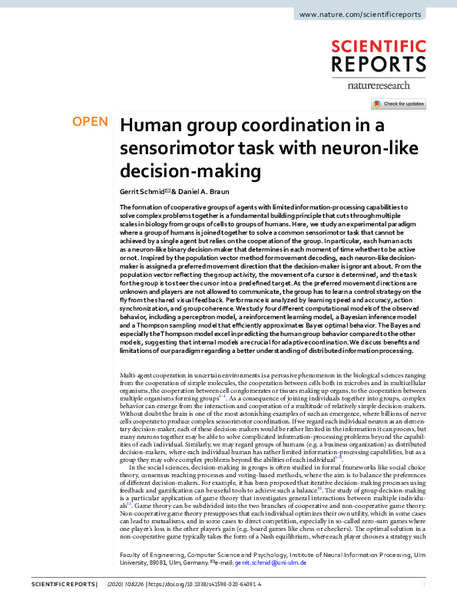 The formation of cooperative groups of agents with limited information-processing capabilities to solve complex problems together is a fundamental building principle that cuts through multiple scales in biology from groups of cells to groups of humans. Here, we study an experimental paradigm where a group of humans is joined together to solve a common sensorimotor task that cannot be achieved by a single agent but relies on the cooperation of the group. In particular, each human acts as a neuron-like binary decision-maker that determines in each moment of time whether to be active or not. Inspired by the population vector method for movement decoding, each neuron-like decision-maker is assigned a preferred movement direction that the decision-maker is ignorant about. From the population vector reflecting the group activity, the movement of a cursor is determined, and the task for the group is to steer the cursor into a predefined target. As the preferred movement directions are unknown and players are not allowed to communicate, the group has to learn a control strategy on the fly from the shared visual feedback. Performance is analyzed by learning speed and accuracy, action synchronization, and group coherence. We study four different computational models of the observed behavior, including a perceptron model, a reinforcement learning model, a Bayesian inference model and a Thompson sampling model that efficiently approximates Bayes optimal behavior. The Bayes and especially the Thompson model excel in predicting the human group behavior compared to the other models, suggesting that internal models are crucial for adaptive coordination. We discuss benefits and limitations of our paradigm regarding a better understanding of distributed information processing.