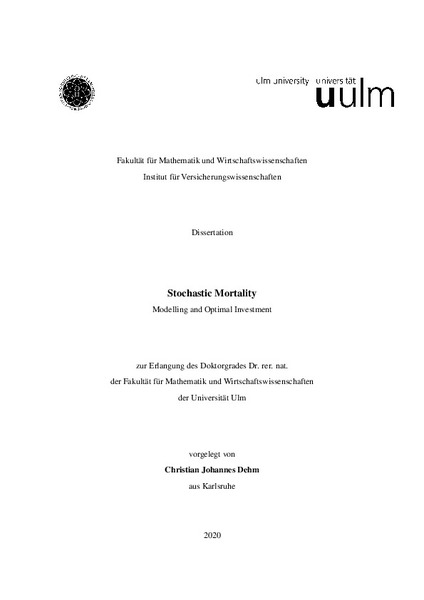 Nothing is more certain than death, nothing more uncertain than its hour. Even today the timepoint of death is unknown, but death will occur with certainty. In this work, the uncertainty of death time is included in our considerations of mortality modelling, optimal investment as insured under uncertain death time and optimal investment as insurance company under mortality risk. This work provides three contributions to scientific literature: In the first part, we suggest causality-based modifications of the Gompertz law and the Lee Carter model with focus on main death causes. In an application on German health data, we identify three main death causes, namely 'diseases of circulatory system', 'neoplasms' and 'diseases of the respiratory system', completed by modelling 'accumulated remaining diseases'. Using VAR(p)-time series models, we forecast life expectancy and life annuity for the total population as well as for the genders separately. The causal Lee Carter model for men matches the holistic Lee Carter model best, with nearly same life expectancy and life annuity. Moreover, we find that the predominant marginal impact on life expectancy are 'neoplasms' with an average loss of about 5 years. In the second contribution, we consider an optimal investment problem inspired by a life insurance contract. These contracts usually have an option-like form with the additional difficulty that the timepoint of benefit payment (e.g. death of the insured) is uncertain. We generalize the known Merton problem in two directions: we consider non-concave optimization with uncertain investment maturity. In fact, we consider general non-concave utility functions and prove an existence and optimality result. To illustrate our findings, we do a numerical study, which suggests that the occurrence of a possible premature stop leads to a reduced performance of the optimal solution in terms of certainty equivalent. Due to the long term of an insurance contract, a typical life insurance company is subject to interest and investment risks as well as mortality risk. In our third contribution, we consider these risks as jump-diffusion processes. Through (interest) zero-coupon bond and longevity bond, interest rate risk and mortality risk can be (partially) traded on the capital market. In this Levy-market, we derive an extended HJB equation system to be able to find closed-form solutions of the optimal trading strategy and the expected terminal value. We prove necessity and sufficiency of the HJB equation approach. Moreover, we show a general L2-asymptotic of truncated Levy processes.