The role of DNA-fragmentation in contrast-induced tubular cell damage 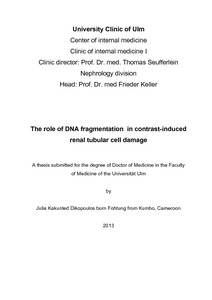 Background: Intravascular administration of iodinated contrast is a common cause of hospital-acquired acute kidney injury. Evidence suggests that radiocontrast agent induced nephrotoxicity is associated with increased oxidative stress, leading to renal tissue damage with DNA fragmentation. We tested whether an iso-osmolar contrast medium (Iodixanol) causes less oxidative DNA damage to renal tubular cells compared to a low-osmolar contrast medium (Iopromide). Method: Human kidney cells (HK-2 cells) were incubated in a predefined period of time (10 minutes - 2 hours) with increasing concentrations of Iodixanol and Iopromide (20 - 120mg/ml iodine) and the ammount of DNA damage induced on the cells was compared. DNA damage was analysed using the comet assay. Results: We found that the two different classes of contrast media induce DNA fragmentation in vitro in a time and concentration dependent manner. DNA fragmentation was maximal at 2 hours with 120 mg for iopromide and iodixanol; both were significantly different from the control value (Student’s t-test; p < 0.001). Furthermore, iodixanol produced significantly higher DNA fragmentation than iopromide . Conclusion: On the basis of the paradigm that DNA strand breaks or fragmentation are synonymous to oxidative stress, we effectively demonstrated that contrast media induced oxidative stress in HK-2 tubule cells. Renal cell damage was observed for both contrast media at high concentrations such as is presumed to occur in patients with impaired renal function; this effect is more evident in iodixanol than it is in iopromide. Collectively, we demonstrate that an iso-osmolar contrast medium induced greater oxidative stress and consecutive DNA damage than a low osmolar agent in HK-2 cells. This is contrary to the widespread notion that iso-osmolar contrast media may be less nephrotoxic than low-osmolar contrast media and could provide an explanation for the nephrotoxicity observed with iodixanol in clinical practice.