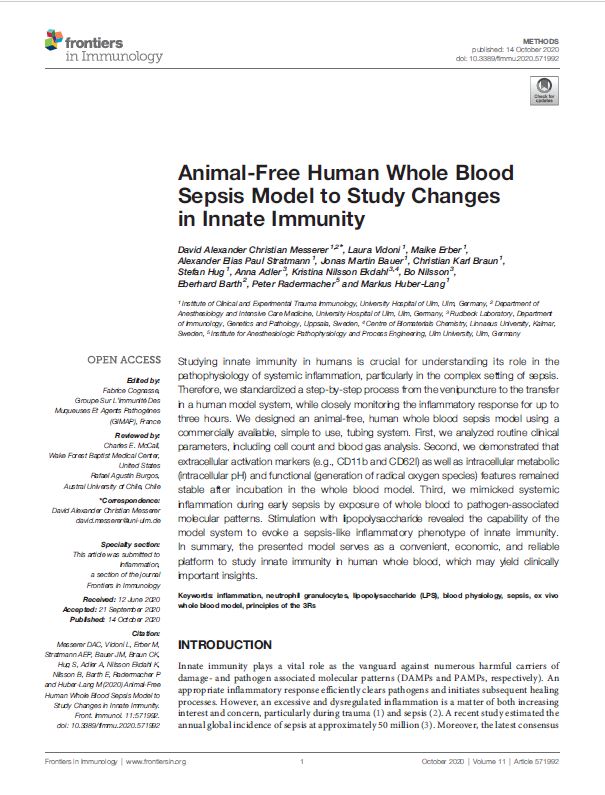 Studying innate immunity in humans is crucial for understanding its role in the pathophysiology of systemic inflammation, particularly in the complex setting of sepsis. Therefore, we standardized a step-by-step process from the venipuncture to the transfer in a human model system, while closely monitoring the inflammatory response for up to three hours. We designed an animal-free, human whole blood sepsis model using a commercially available, simple to use, tubing system. First, we analyzed routine clinical parameters, including cell count and blood gas analysis. Second, we demonstrated that extracellular activation markers (e.g., CD11b and CD62l) as well as intracellular metabolic (intracellular pH) and functional (generation of radical oxygen species) features remained stable after incubation in the whole blood model. Third, we mimicked systemic inflammation during early sepsis by exposure of whole blood to pathogen-associated molecular patterns. Stimulation with lipopolysaccharide revealed the capability of the model system to evoke a sepsis-like inflammatory phenotype of innate immunity. In summary, the presented model serves as a convenient, economic, and reliable platform to study innate immunity in human whole blood, which may yield clinically important insights.