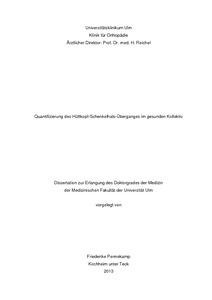 To quantify head-neck offset pathology in cam-type femoroacetabular impingement, the alpha-angle is a frequently used radiographic parameter. There is, however, diverging information on norm values and reference intervals for alpha-angle, especially for male subjects. In this study a cohort of 339 patients without any hip pathology was selected from a consecutive series of 5156 patients, whose hip joints were evaluated radiographically from January 2000 until December 2009 at our institution. The anteroposterior and lateral radiographs of 170 male and 169 female subjects were reviewed and alpha-angle, head-neck offset ratio and triangular index were measured to quantify head-neck offset at the proximal femur. For male subjects, the mean alpha-angle is 49.4 ° for anteroposterior and 49.1 ° for lateral radiographs, whereas for female subjects it is 45.0 ° and 46.1 °. Thus, calculated upper limits of reference intervals in the population screened are 70 ° for both radiographic projections in males and 61 ° for anteroposterior and 66 ° for lateral radiographs in females, respectively. These data demonstrate that alpha-angle’s pathological range in male subjects may be lower than previously assumed.