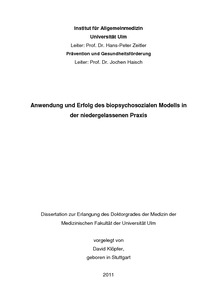 Background: The biopsychosocial model of risk and resources hypothesizes that illness and recovery are affected by biomedical, psychological and social parts of risks as well as by personal resources. The aim of this study was to collect data on the usage of the biopsychosocial model by primary care physicians and its influence on therapeutic successes. Methods: Mail questionnaires were sent to all primary care physicians (general practitioners and internists; 95 doctors´ offices) of a southern German city. Sociodemographic data concerning doctors and patients were collected as well as diagnoses. Furthermore, the doctors were asked about their patients´ risk factors, resources (helpful coping factors) and pathogenic factors connected with their estimation of the individual therapeutic success (four-point scales). The questionnaire afforded doctor´s time between 5 and 10 minutes. Results: 27 doctors´ offices participated in this study (28 % response rate); 5 were managed by internists and 22 by general practitioners. Data of 120 patients were collected. Both groups of doctors significantly preferred biomedical risks as well as pathogenic factors compared to psychosocial factors. General practitioners acknowledged psychosocial pathogenic factors significantly more often than internists. Doctors who regarded patients’ resources more frequently also perceived a better therapeutic response. Conclusion: The study demonstrates primary care doctors’ preference for biomedical views compared to psychosocial views of illness. However, when a more holistic view of illness is used the perception of therapeutic success increased as well. Therefore, the biomedically dominated education of doctors should be extended more explicitly by the biopsychosocial perspective.