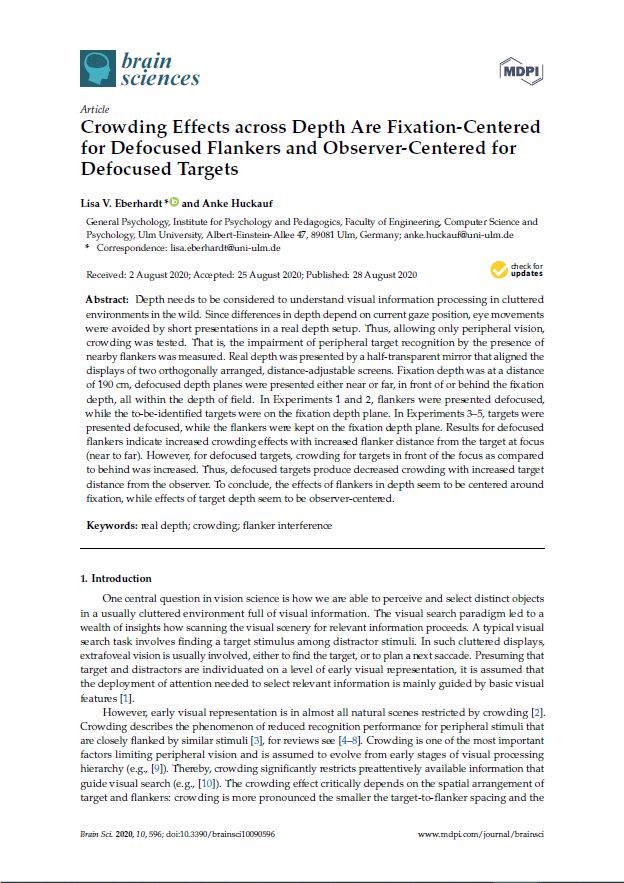 Depth needs to be considered to understand visual information processing in cluttered environments in the wild. Since differences in depth depend on current gaze position, eye movements were avoided by short presentations in a real depth setup. Thus, allowing only peripheral vision, crowding was tested. That is, the impairment of peripheral target recognition by the presence of nearby flankers was measured. Real depth was presented by a half-transparent mirror that aligned the displays of two orthogonally arranged, distance-adjustable screens. Fixation depth was at a distance of 190 cm, defocused depth planes were presented either near or far, in front of or behind the fixation depth, all within the depth of field. In Experiments 1 and 2, flankers were presented defocused, while the to-be-identified targets were on the fixation depth plane. In Experiments 3–5, targets were presented defocused, while the flankers were kept on the fixation depth plane. Results for defocused flankers indicate increased crowding effects with increased flanker distance from the target at focus (near to far). However, for defocused targets, crowding for targets in front of the focus as compared to behind was increased. Thus, defocused targets produce decreased crowding with increased target distance from the observer. To conclude, the effects of flankers in depth seem to be centered around fixation, while effects of target depth seem to be observer-centered.