Influence of molybdenum back contact on the PID effect for Cu(In,Ga)Se2 solar cells 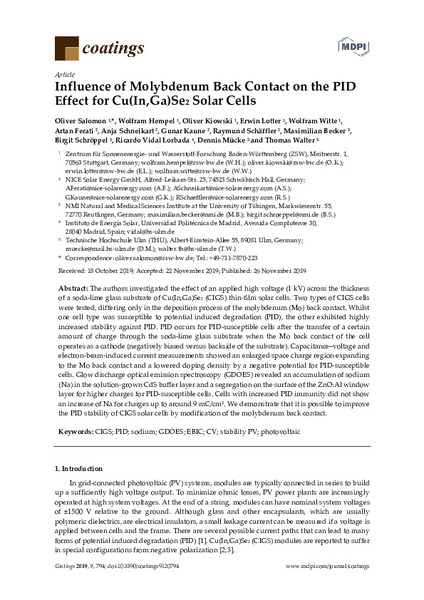 The authors investigated the effect of an applied high voltage (1 kV) across the thickness of a soda-lime glass substrate of Cu(In,Ga)Se2 (CIGS) thin-film solar cells. Two types of CIGS cells were tested, differing only in the deposition process of the molybdenum (Mo) back contact. Whilst one cell type was susceptible to potential induced degradation (PID), the other exhibited highly increased stability against PID. PID occurs for PID-susceptible cells after the transfer of a certain amount of charge through the soda-lime glass substrate when the Mo back contact of the cell operates as a cathode (negatively biased versus backside of the substrate). Capacitance–voltage and electron-beam-induced current measurements showed an enlarged space charge region expanding to the Mo back contact and a lowered doping density by a negative potential for PID-susceptible cells. Glow discharge optical emission spectroscopy (GDOES) revealed an accumulation of sodium (Na) in the solution-grown CdS buffer layer and a segregation on the surface of the ZnO:Al window layer for higher charges for PID-susceptible cells. Cells with increased PID immunity did not show an increase of Na for charges up to around 9 mC/cm². We demonstrate that it is possible to improve the PID stability of CIGS solar cells by modification of the molybdenum back contact.